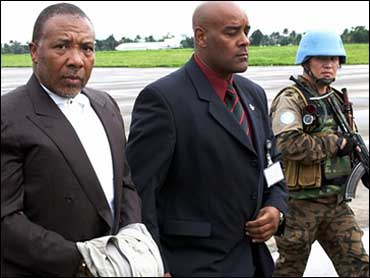 Former Liberian President Charles Taylor arrived in the Netherlands on Tuesday for a war crimes trial on charges accusing him in the death, rape or mutilation of hundreds of thousands of people in West Africa.

An airport official said Taylor's U.N.-chartered plane landed after a direct flight from Sierra Leone, where he had been in detention since March 29. Two police vans and five motorcycle outriders were waiting on the tarmac at a small commercial airport south of The Hague.

Earlier in the day, Taylor was flown by U.N. helicopter to the airport on the outskirts of Sierra Leone's capital and escorted onto the plane for the flight to Europe, said Peter Andersen, a spokesman for the war crimes court.

Taylor faces 11 counts of war crimes and crimes against humanity stemming from his alleged role while he was Liberia's president in backing Sierra Leonean rebels, who terrorized victims by chopping off their arms, legs, ears and lips during the country's 1991-2002 civil war.

Although the charges refer only to Sierra Leone, Taylor is also accused of fomenting violence in his homeland and elsewhere in West Africa.

The Sierra Leone court had asked the Netherlands-based International Criminal Court to host the trial, fearing Taylor's trial in Africa might revive regional instability. The Sierra Leone court's officials will conduct the proceedings, with the ICC providing courtrooms and a jail during the trial.

Liberia's new president, Ellen Johnson-Sirleaf, had also called for the trial to be held outside Africa because of security concerns. In an interview with CNN on Tuesday, she said he still has supporters in Liberia who might react to his trial.

She added she was confident "justice will ultimately be served," freeing Liberians to focus on the future and shifting attention from Taylor.

"We've got 3 million Liberian people that we want to concentrate on," she said.

Jewel Howard-Taylor, who divorced Taylor last year but remains in close touch, said she hoped for a speedy trial. "We look forward to the trial being free and fair and being held as soon as possible," she told The Associated Press in Liberia.

Taylor had objected to the move to Europe, saying it would be difficult for his witnesses to travel to testify and for his family to lend him support. Many of his close associates, though, face travel bans stemming from alleged corruption that would have made even travel to Sierra Leone impossible.

The Netherlands agreed to host the trial on condition that a third country jail Taylor if he is convicted or take him in if acquitted. Denmark, Austria and Sweden had all rejected requests to jail Taylor, but Britain volunteered last week.

The road to trial for Taylor began when he went into exile in Nigeria in August 2003 as part of a deal that helped end Liberia's 14-year civil war. After the Nigerian government agreed in March to a request from Liberia's new president to hand him over, he tried to slip away but was captured and flown to Sierra Leone.

He has been in the Special Court's detention facilities in the Sierra Leonean capital since March 29 and pleaded not guilty at an April 3 arraignment.

Taylor launched an insurgency in Liberia in 1989, plunging the country into a civil war that led to the deaths of 200,000 people. He won presidential elections in 1997 in a landslide, but rebels took up arms against him three years later and attacked the capital Monrovia in 2003. His flight to Nigeria finally brought calm.