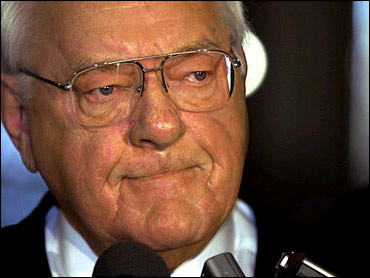 Former Gov. George Ryan pleaded not guilty Tuesday to federal corruption charges alleging he took payoffs, gifts and vacations while secretary of state and governor of Illinois in return for letting associates profit off state contracts and leases.

Ryan's attorney, Dan Webb, entered the plea of not guilty to charges of racketeering conspiracy, mail fraud, tax fraud, filing false tax returns and making false statements to agents investigating corruption. Ryan answered "I do" four times when the judge asked if he understood the charges.

The charges in the 22-count indictment announced last Wednesday against Ryan and lobbyist friend Larry Warner could send them to prison for years. Warner, who allegedly collected at least $3.1 million through his insider status with Ryan, pleaded not guilty last Friday.

Ryan did not comment when he entered the courthouse.

Outside Illinois, Ryan is best known as an ardent critic of the way capital punishment is carried out. He declared a moratorium on executions in the state after it was discovered that 13 wrongfully convicted men had been sent to death row.

In January, just before leaving office, he cleared out Illinois' death row, pardoning four condemned prisoners and commuting the death sentences of 167 others to life in prison.

The indictment is the latest in the government's 5 1/2-year Operation Safe Road investigation of corruption under Ryan that began as an inquiry into bribes paid for drivers licenses.

Ryan, a Republican who served as secretary of state from 1991 to 1999 and governor from 1999 to January, has said he knew there was a culture of corruption in the secretary of state's office but was unaware of the specifics.

Ryan became the 66th person charged in the investigation and the fourth former Illinois governor to be indicted by a federal grand jury in as many decades.

The scandal was a factor in his decision not to seek a second term, and his unpopularity was considered a major reason Republican candidates were routed statewide in 2002, including the election of a Democratic governor for the first time since 1972.