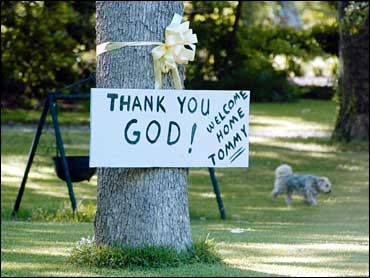 Former Iraqi hostage Thomas Hamill returned to American soil Saturday to a chorus of cheering family and friends, but people close to him say his thoughts are with Americans still in harm's way in Iraq.

"Tommy is extremely concerned about his comrades in Iraq and thinking about them is his priority," said family spokeswoman Aly Goodwin-Gregg.

The 44-year-old Hamill, and wife Kellie, spoke only to friends and relatives after returning home on a flight from Germany about 1 a.m. Saturday. They were met at the plane by about a dozen friends and neighbors; members of the media outnumbered the supporters 2 to 1.

CBS News Correspondent Peter King reports Hamill's return to Macon was so low-key at his request. He wants time alone with his family, and his neighbors are respecting that request for privacy.

"Tommy will not be speaking to media today or tomorrow or until further notice," said Goodwin-Gregg.

Hamill, whose plight captured the attention of the nation, escaped his Iraqi captors Sunday and has been treated for an arm injury at Landstuhl Regional Medical Center in Germany. He was wounded when his convoy was ambushed April 9.

The family held a cookout Saturday. Hamill came out to his back yard in the afternoon, holding up his wounded arm in greetings to those outside. He and his wife then walked around, arm in arm, greeting friends and family before joining others for the meal.

The truck driver, who works for Halliburton Corp. subsidiary KBR, released a statement through the company Saturday, saying that he is praying for "my two missing colleagues, the safety of my friends and co-workers in Iraq as well as the families of those who have lost a loved one."

Hamill arrived in Macon in the middle of the night, at least partly to avoid too much attention. His friend Jesse Green, who has known Hamill since they were boys, was among those waiting for him.

"The first time I'd seen was in the back seat of the patrol car. We just told him we're glad to see him and he said 'I'm glad to be home,'" Green told King. "It was a great sight and he had family and all when he got here so it was just a relief to see him step a foot down on Mississippi soil."

All was quiet at the Hamill home Saturday morning. Yellow police tape kept waiting media crews off the lawn, and ribbons decorated the two white columns in front of the modest brick home. Red, white and blue balloons floated atop the mail box.

Hamill said earlier this week that he was particularly looking forward to quiet time with his children. As a result, Macon Mayor Dorothy Baker Hines said plans for a parade and other celebrations in his hometown were called off for now.

The news was a disappointment to some in this rural east Mississippi community of about 2,500.

"They prayed and had hopes up. They are glad he's home. They wanted to celebrate with him," said Tina Brooks, 36.

But Green said Hamill "does not want to draw any attention to himself. He does not consider himself a hero."

Hamill has received plenty of mail from well-wishers.

"I do know of several scrapbooks of stuff and that's just a start. They don't have it completely filled or anything like that," said Green.

The mail and telephone calls also include movie and book offers.

"He's got mail about movie deals and all sorts of things," his mother, Phyllis Hamill, said Friday.

Hamill has made no decision about a book deal, said Stephen Goodwin, father of Goodwin-Gregg and part of the public relations team hired by former POW Jessica Lynch and now Hamill. Lynch received a book deal valued at $1 million and a network turned her story into a television movie.

There were no plans for any public statements by Hamill, said Goodwin-Gregg. She said Hamill "doesn't want to say or do anything the might incite action" against other captives.

Hamill was among seven American contractors who disappeared after the April attack. The bodies of four have been found, and two workers remain missing. Two military men also vanished; one was later found dead and the other, Pfc. Keith M. Maupin of Batavia, Ohio, remains missing.