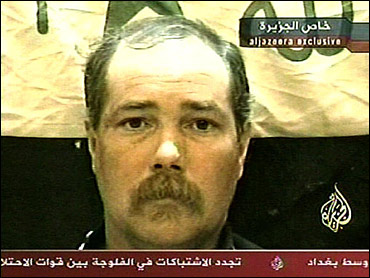 Former American hostage Thomas Hamill, who was shot when he was abducted in Iraq, was treated for the wound and regularly received food during his three weeks in captivity, a U.S. military doctor said Tuesday.

Hamill, who escaped his captors Sunday in a daring run to freedom, has lost a few pounds but feels "in generally good health," said Maj. Kerry Jepsen, a surgeon treating Hamill at a U.S. military hospital in Germany where the ex-captive arrived Monday.

Hamill, a 43-year-old truck driver for a Halliburton Corp. subsidiary, waved to reporters with his bandaged right arm from a balcony at the Landstuhl Regional Medical Center. He said he was feeling well.

"I am very glad to be back on an American installation. I am looking forward to returning to America," he said. He urged Americans to "keep your thoughts and prayers with those who are still" in Iraq.

In his escape, Hamill pried open the door of a shack where he was being held and ran a half-mile to a U.S. military convoy passing by near the town of Balad, north of Baghdad.

"He feels very lucky to have gotten away," Jepsen told reporters. "He's looking forward to meeting his family and getting back home."

Hamill was shot in the arm when his convoy was ambushed April 9. After about a week in captivity, he received surgery that cleaned away dead tissue, although it's unclear whether he was taken to a clinic or a doctor came to him, Jepsen said. His bandages were changed daily and he got antibiotics.

His English-speaking captors initially "left him with some water and a couple packages of cookies," Jepsen said.

They frequently moved him from place to place, guarding him in cramped, mosquito-infested rooms where he had to sleep on the floor and had to stay inside during daylight hours, Jepsen said.

On the day he got free, Hamill recognized the rumble of U.S. military vehicles' diesel engines nearby and decided to make a run for it.

"He just said, 'This is my opportunity and I'm going to make it. He's going to have to shoot me or take me out,'" Jepsen said.

Military doctors have said Hamill, from Macon, Miss., is in good shape and would likely return home this week. Jepsen told ABC that Hamill would need reconstructive surgery on his arm, "but we expect that he should have a good recovery and do well."

Hamill's wife, Kellie, was expected to meet him at Landstuhl on Wednesday.

"I am looking forward to reuniting with my wife in the morning," Hamill said.

Shortly after the ambush, Hamill's abductors spotted journalists and had them videotape him sitting in a car next to a masked gunman.

Hamill, who works for Halliburton subsidiary KBR, was among seven American contractors who disappeared after the April attack. The bodies of four have been found, and two are missing.

A U.S. soldier kidnapped in the same attack, Pfc. Keith M. Maupin of Batavia, Ohio, was seen in separate video footage. The remains of a second soldier missing in the attack, Sgt. Elmer Krause of Greensboro, N.C., were identified April 23.