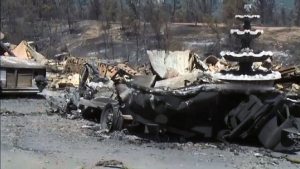 REDDING, Calif. - A former firefighter is in custody on suspicion of murder and arson in a rural Northern California wildfire that left one person dead and destroyed hundreds of structures, a state fire official said Wednesday.

McLean said Peterson's arrest came after three months of investigation. Peterson is also accused of starting six other fires since September. He faces hundreds of charges related to the fires including arson causing great bodily injury, and arson of inhabited dwellings, and is being held without bail in the Shasta County Jail.  He was scheduled to appear in court on Wednesday.

"This is still an ongoing case. There's still more work to be done on our part to make sure this comes to a positive conclusion," McLean said Wednesday. He declined to go into more specifics about the case, including a motive, citing an ongoing investigation.

The Clover Fire that started in early September charred nearly 13 square miles, destroyed 68 homes and 128 other structures. The fire has been blamed in the death Brian Stanley Henry, 56, whose body was found inside a motor home destroyed by flames in the community of Igo, which is located about 150 miles north of Sacramento.

The blaze was fanned by gusty winds, and spread at about 500 acres an hour at its peak. More than 1,500 firefighters battled the fire that cost more than $7 million to fight. It took about a week to contain.

"This is a significant arson arrest for CAL FIRE, Shasta County, and the residents who endured the Clover Fire and suffered losses. The tragic loss of life and so many homes at the hands of an intentional fire is a heinous act," Doug Wenham, a CalFire regional chief, said Tuesday.

Records kept by the U.S. Forest Service show Peterson worked for the Mendocino National Forest at one time. But he had not been employed by the forest service for more than a year, said Stanton Florea, spokesman for the Pacific Southwest region.

If convicted, Peterson faces a 25 years-to-life sentence for the murder charge, and 90 years for the arson charges, Hanna said.

A call placed to a number for Peterson was not immediately returned Wednesday.

Details on the evidence against Peterson were not released.