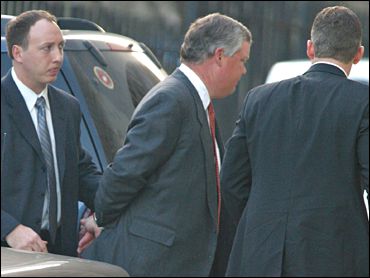 Enron Corp.'s former top accountant pleaded innocent Thursday to conspiracy and fraud charges in an indictment that accused him of being "a principal architect" of schemes to mislead investors in the scandal-ridden energy company.

Causey's arrest could bring prosecutors closer to Enron's executive suite. The indictment noted that — like Fastow — Causey reported directly to the chairman and chief executive. It did not name former Enron chairman Kenneth Lay or former CEO Jeffrey Skilling, neither of whom has been charged and whom maintain their innocence.

"This is yet another reason for Jeffrey Skilling and Kenneth Lay to have a sleepless night or two," says CBSNews.com Legal Consultant Andrew Cohen. "Causey was below Andrew Fastow in the pecking order at Enron but that doesn't necessarily mean that he would add nothing to a potential case against Lay and Skilling.

"And even if Causey has nothing new to offer, he might be able to corroborate certain stories that other former officials have offered," Cohen adds.

Causey, who surrendered to the FBI before daybreak Thursday and was hauled off to court in handcuffs, was described in the six-count indictment as "a principal architect and operator of the scheme to manipulate Enron's reported earnings."

He pleaded innocent and was released on $1 million bond, secured by $500,000 in cash provided by a brother-in-law.

"Rick Causey is a decent, honorable and innocent man," his attorney, Mark Hulkower, said. "He has done nothing, absolutely nothing, wrong. We will vigorously contest these charges, and we look forward to the day when Mr. Causey's vindicated in this courthouse."

It also alleged Causey had secret agreements with Fastow that the finance chief wouldn't lose money when his shady partnerships did deals with Enron.

"The scheme extended into every major business at Enron," prosecutor Sam Buell said.

According to the indictment, the scheme's objectives, among other things, were to produce earnings that grew by 15 to 20 percent annually, meet or exceed "without fail" Wall Street expectations and avoid public reporting of large write-downs or losses.

Causey's handcuffs were removed after he sat down in the Houston courtroom. When U.S. Magistrate Judge Frances Stacy asked if he was employed, he replied: "I am not."

Causey was fired in February 2002 after an internal probe concluded he failed in his duty to adequately look out for Enron's interests when the energy giant did deals with Fastow's partnerships. Causey and Fastow split financial duties at Enron and were at the same management level.

He is charged with one count of conspiracy and five counts of securities fraud. If convicted of all six charges, he faces a maximum sentence of 55 years in prison and $5.25 million in fines.

His indictment, handed up Wednesday and unsealed Thursday, came on the heels of guilty pleas last week from Fastow and Fastow's wife, Lea.

Fastow pleaded guilty to two counts of conspiracy, admitting he and others in Enron's senior management manipulated Enron's books while skimming millions of dollars for himself, his family and selected friends. His wife admitted to helping hide ill-gotten income on a false tax return.

Causey became the 27th person charged in the aftermath of Enron's 2001 collapse amid revelations of hidden debt, inflated profits and accounting tricks. Nine of them, including the Fastows, have pleaded guilty.

"The dominoes continue to fall as we expose the truth about the massive fraud at Enron," said Assistant Attorney General Christopher A. Wray in Washington. "On the heels of guilty pleas by Enron's former chief financial officer and treasurer, today's indictment demonstrates that the same tried and true law enforcement methods that we use against drug cartels and organized crime families will also penetrate the most complex corporate fraud scheme."

Causey was one of many Enron executives who joined the energy giant after working at its former outside auditor, Arthur Andersen LLP. He started at Enron in 1991 as assistant controller and became chief accounting officer in 1999.