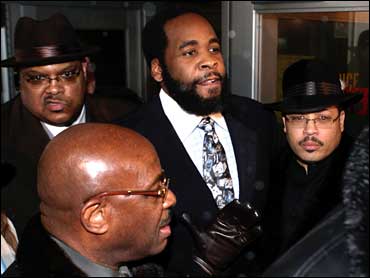 Kwame Kilpatrick regained his freedom early Tuesday morning, emerging from jail after a 99-day sentence and stepping back onto the streets of the city he once ruled as mayor.

The 38-year-old Kilpatrick, about 25 pounds lighter than when he entered jail at the end of October, left the downtown Detroit facility wearing a dark suit just after 12:30 a.m.

On the sidewalk, Kilpatrick stood for a long moment amid bright television camera lights, a crush of awaiting reporters and swirling snowflakes, smiling occasionally to those in the crowd who called his name and shouted: "We love you, Kwame! Detroit loves you, baby!"

Kilpatrick made no statements to the media during his release. He flew to Dallas later in the day to reunite with his family. His attorneys say he has a job interview in Texas on Wednesday.

Tuesday night, Kilpatrick told Dallas-Fort Worth television station WFAA his 99-day jail stay was "an incredibly purifying process" and the most time he's had to be with himself and God.

Standing next to wife Carlita, Kilpatrick it was hard to be separated from her and his three young sons. "You caught me crying. This is something I don't usually ... don't do," he said. "My guys look so much older."

It's been more than a year since a text-messaging sex scandal started the long process that ended in Kilpatrick's arrest, plea, jailing and release. Now, the man who quickly rose from a state representative to mayor of a city of 900,000 people simply is looking for work.

A judge has ordered that he return from Texas by Monday. In his television interview Tuesday night, Kilpatrick didn't offer specifics about the job possibility.

"The job prospect is very, very, very favorable," defense attorney Willie E. Gary told reporters in Detroit as Kilpatrick was released. "We want to make sure he can get, and land, the job. That's his first thing. He wants a job. That's what he is concerned about now. He wants to get with his family, get with his kids so he can start his life again."

The next five years, though, will be spent on probation and paying off the bulk of $1 million in restitution to the city. He also has had his law license revoked.

If Kilpatrick lands the job in Texas, he must first get permission to transfer his probation from Michigan to that state.

Kilpatrick was into the middle of his second term as mayor when sexually explicit text messages with his then-Chief of Staff Christine Beatty were published by the Detroit Free Press.

The messages from Beatty's city-issued pager also contradicted testimony that she and the married mayor gave during a 2007 whistle-blowers' trial when they denied having a romantic relationship. The messages also indicated they lied about their roles in the firing of a police official.

The cash-strapped city, now facing a deficit believed to be more than $200 million, eventually settled the civil suit with three former officers for $8.4 million.

Kilpatrick and Beatty were charged last March with perjury, misconduct and obstruction of justice.

Before his trial on those charges was to begin in September, Kilpatrick pleaded guilty to obstruction of justice and no contest to assault for allegedly shoving a detective who was trying to serve a subpoena in the text-message case.

He stepped down as mayor on Sept. 18. Beatty, who resigned last February, was sentenced early last month to 120 days in jail after pleading guilty to obstruction of justice.