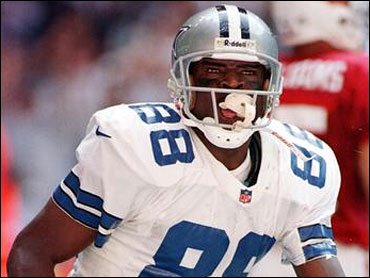 Irvin, a semifinalist for the Pro Football Hall of Fame, was arrested on an outstanding warrant for speeding in Irving after being pulled over Friday afternoon for speeding in Plano, the Plano Police Department said. Police spokesman Mike Johnson said he didn't know what kind of paraphernalia was found.

Irvin paid a fine on the speeding ticket and posted bond on the drug paraphernalia possession charge. He was released about an hour after he was pulled over.

Irvin, a member of three Super Bowl championship teams with the Cowboys, retired in July 2000 and works as a studio analyst for ESPN.

In 1996, Irvin pleaded no contest to felony cocaine possession in exchange for four years of deferred probation, a $10,000 fine and dismissal of misdemeanor marijuana possession charges.