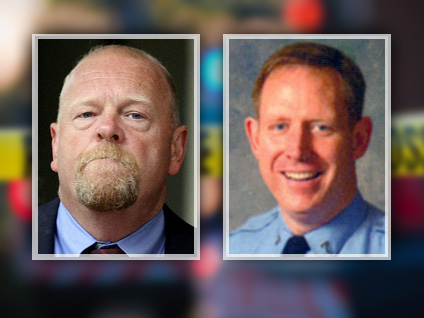 NEW ORLEANS - A former New Orleans police officer was sentenced to more than 25 years in prison Thursday for shooting a man to death without justification after Hurricane Katrina, and his ex-colleague was given just over 17 years for burning the body.

The judge said he didn't believe former officer David Warren's testimony that Henry Glover, 31, posed a threat when he came to a strip mall less than a week after the August 2005 storm. Warren shot Glover to death and ex-officer Gregory McRae later burned his body in a car near a police station.

Lawyers for the men argued they deserved some leniency, partly because of the horrific conditions and chaos they faced following the hurricane.

"Your conduct was barbaric," U.S. District Judge Lance Africk told McRae. "The devastation caused by Hurricane Katrina was made uglier by your disturbing actions. At a time when more was expected of you, you failed miserably."

McRae could have received 50 years and Warren faced up to life in prison.

Warren, 48, told jurors at the trial late last year that he opened fire because he feared for his life. Warren was guarding a police substation at a shopping mall when he said Glover and a friend pulled up in a stolen truck and started running toward a gate that would have given them access to the building.

Warren testified that the men ignored his commands to stop and that he thought he saw a gun in Glover's hand before he fired one shot at him from a second-floor balcony.

Testimony later showed Glover was at the strip mall to retrieve some baby clothing.

"You killed a man. Despite your tendentious arguments to the contrary, it was no mistake," Africk said.

Glover's family sat in the courtroom as he was sentenced.

McRae, 49, admitted he drove Glover's body from the police compound to a nearby Mississippi River levee and set it on fire. The car belonged to one of the men who had driven Glover to the compound. McRae said he burned the vehicle because he was weary of seeing rotting corpses after the storm. Another officer, however, testified he saw McRae laughing after he set the fire.

Jurors also convicted former Lt. Travis McCabe of writing a false report on the shooting. His sentencing has been postponed while his lawyers seek a new trial based on what they say is newly discovered evidence.

The jury cleared Lt. Dwayne Scheuermann of charges he burned Glover's body and beat one of the men who brought the dying Glover to a makeshift police compound in search of help after the Sept. 2, 2005, shooting. Robert Italiano, a retired police lieutenant, was acquitted of charges he submitted a false report on the shooting and lied to the FBI.

A total of 20 current or former New Orleans police officers were charged last year in a series of Justice Department civil rights investigations. The probe of Glover's death was the first of those cases to be tried.

Next week, two officers are scheduled to be tried on charges stemming from the July 2005 beating death of a 48-year-old man. And a trial is scheduled to start in June for five current or former officers charged in deadly bridge shootings and an alleged plot to make the shootings appear justified.

Police shot and killed two people and wounded four others on the Danziger Bridge less than a week after Katrina. Five other former officers already have pleaded guilty to participating in a cover-up of the shootings.