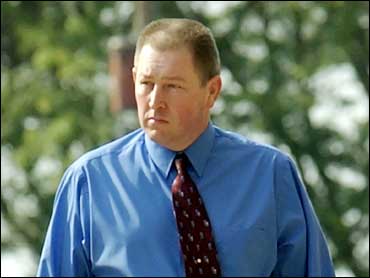 Sarah Gliege remembers far too much about the January night she was raped.

And she remembers thinking she might save herself if she just gave in.

"No one should have to beg another person for his or her life," Gliege said Tuesday before Jeffrey Pelo, the man convicted of the 2005 rape, was sentenced to 440 years in prison. "It's a soul-crushing experience."

Judge Robert Freitag sentenced Pelo, a former Bloomington police sergeant, for the rapes of Gliege and three other women between 2002 and 2005 and the stalking of a fifth woman.

Gliege and another victim, Kristy Mills, read statements Tuesday before sentencing. They asked reporters to use their names to emphasize they aren't ashamed of what happened to them. Many news media outlets, including The Associated Press, typically withhold sexual assault victims' names.

Pelo, 43, slouched forward in his chair but otherwise didn't react as Freitag issued the sentence.

"You literally went from a protector of our community to a plague on our community," the judge told Pelo after explaining an array of sentence enhancements that added decades to his prison term. "It is necessary to impose a sentence that will ensure that the defendant will never again be free."

Pelo uttered four barely audible words when Freitag asked him if he had anything to say.

"I'm innocent," Pelo said in his only statement during the trial. "That's all."

His attorney, Michael Rosenblat, said he plans to appeal the verdict. Freitag earlier Tuesday rejected a defense motion for a new trial.

Pelo's wife offered the court a four-page handwritten letter in support of her husband. In it, she called him "the most loving, caring, responsible, respectable and most decent person I have ever known."

Sitting just a few feet from Pelo, Mills and Gliege talked about how the sentence would help their ongoing efforts to piece their lives back together, and the no-winners nature of the case.

"There's relief - I know he's not going to be out there," Mills said. "There's sadness, too. (Pelo's) kids have lost their father now."

Jurors deliberated for parts of three days in June before finding the 17-year police veteran guilty on 35 counts, including 25 counts of aggravated sexual assault.

They convicted him without physical evidence linking him to the crimes. But prosecutors used dozens of witnesses and evidence found in Pelo's home to portray him as a man obsessed with violent pornography who paradoxically wanted his victims to like him. They also said his police computer login was used to research rape victims before the attacks.

Pelo has been jailed since his arrest outside a woman's home. Another Bloomington officer spotted him late on June 11, 2006, after the woman reported a prowler.

Pelo claimed he was shopping for a home for his mother-in-law. His wife, Rickilee Pelo, backed up that claim, saying her husband often kept strange hours after working night shifts for years.

Pelo initially faced burglary and stalking charges, but over the next month three of the four rape victims identified him from photos as their attacker. Two of them also identified his voice as that of the man who raped them.

Gliege, who appeared confident during testimony earlier this summer, said Tuesday that it was a facade.

In her statement, she said she feared being alone, was often unmotivated and depressed and found it difficult to work. Gliege lost the child she was carrying when she was raped.

She and her husband moved to Chicago not long after the attack, she said, but she made no friends there, and they moved back to Bloomington this week.

"No one knows me," she read through tears. "I feel like a fake, and everyone feels sorry for me or uncomfortable around me."