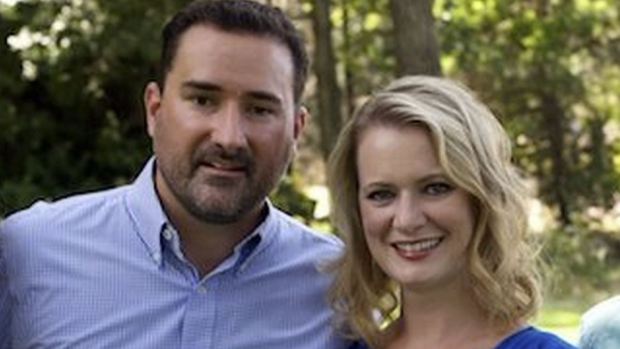 MADISON, Wis. -When 39-year-old Andrew Steele retired as a sheriff's deputy, his career cut short by the advance of ALS, he had no bigger cheerleader than his wife. Ashlee Steele, also 39, spearheaded a drive to raise $75,000 for his medical care, and her Facebook feed is filled with the shrieks and laughter of the cold-water challenges the couple's family and friends were eager to accept.

Now, Andrew Steele is a suspect in the killings of his wife and her sister, Kacee Tollefsbol, at the Steeles' home Friday in Fitchburg, Wis., a suburb of Madison. Steele himself is being treated for an apparent suicide attempt that police say they never saw coming. He was arrested Friday.

"Nobody closely aligned with Andy and his family expected something like this to occur," Dane County Sheriff Dave Mahoney told The Associated Press on Monday. "We believe his diagnosis had an impact on the family but they were moving forward."

Mahoney said Steele had been a deputy since November 1998. He had worked for the past several years in the county jail but resigned in June after he was diagnosed with amyotrophic lateral sclerosis, better known as ALS, or Lou Gehrig's disease. ALS attacks nerve cells and can lead to complete paralysis and death. The average life expectancy is two to five years after diagnosis.

CBS Minnesota reports charges are expected against the suspect on Tuesday.

Before Friday, Mahoney said deputies had been talking with Steele about joining the family's "Tough as Steele" effort to raise money for his medical care and other family expenses. The Steeles have two children while Tollefsbol was the mother of four.

"We're trying to understand what could possibly have gone wrong and resulted in the death of two young women and the fact that there's now six children without a mother," Mahoney said. "There's a lot of unanswered questions. One of the things we do in this profession is we try to make sense of nonsense."

Steele's family started the "Tough as Steele - Taking Down ALS" campaign via the website GiveForward.com. The site said the loss of his income had been crushing to the family. As of Saturday, supporters had raised nearly $23,000 toward their $75,000 goal, the Milwaukee Journal Sentinel reported. The campaign appeared to have been removed from the site over the weekend.

"I never would have expected the type of reaching out people have done," Andrew Steele told WMTV earlier this month. "People that have donated, people that I don't even know very well, I haven't seen or talked to in years. It's hard to describe that."

"She was very organized, just full of joy in general," Gumm said. "She was so great at being hands-on with the kids. She just made kids and parents alike feel at ease."