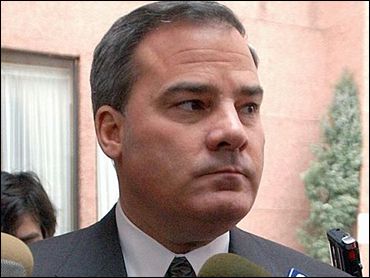 Former Connecticut Gov. John G. Rowland left a federal prison camp Friday after serving more than 10 months for corruption that forced him from office in 2004.

Rowland, 48, was released from Loretto Federal Correctional Institution in western Pennsylvania at about 5:20 a.m., said Ruth Bracken, a prison spokeswoman.

He has three days to report to probation officers, who will fit him with an electronic ankle bracelet and place him under house arrest for four months. Rowland also must perform 300 hours of community service.

The three-term Republican governor resigned in July 2004 amid a corruption investigation and impeachment inquiry, then pleaded guilty the following December to one count of conspiracy to steal honest services, a combination of mail and tax fraud. He admitted accepting more than $100,000 in vacations and chartered trips to Las Vegas from a state contractor and a charter jet company that received a state tax break.

Though he received a year-and-a-day sentence, inmates can be released for good behavior after serving about 80 percent of their sentences.

"Over the next few days I will be spending some quiet time with my incredibly supportive wife, Patty," Rowland said in a statement released Friday morning. "We will be home in a few days and ask that the media give us space and time to reconnect fully as a family as we plan the next phase of our lives."

The investigation into corruption during Rowland's administration is still under way. Among others caught up in the investigation, a former Rowland chief of staff, Peter Ellef, and contractor William Tomasso are to be sentenced in April for bribery.

Rowland was once a rising star in the Republican party and considered a potential candidate for a cabinet position in the Bush administration.

In prison, Rowland's job was to sweep a stairwell, and his uniform was khaki pants and a khaki shirt. He never complained about harassment, his friends said.

"Everybody was just wonderful to him," said Christine Corey, a longtime aide and friend. "It doesn't matter where he goes. He's a likable guy."

Rowland, in his statement, said he found grace in prison.

"I am going to try to be a better person and show my family and friends and the people of Connecticut how truly sorry I am for letting them down," he said.

Brad Davis, a Hartford radio talk show host and a close friend, said Rowland started a job-training program in prison to teach the inmates interview skills, and began another program to help inmates with drug and alcohol problems. He said the gregarious Rowland was able to gel with the men he served time with at Loretto.

Rowland's employment now that he's out of prison remains uncertain.

Davis said Rowland mentioned motivational speaking. The Rev. Cornell Lewis, a Hartford community activist, said he had talked with the former governor about working with the "Men of Color Initiative" in Hartford, a program that has evolved to patrolling housing tenements and helping young people find jobs.

"I think he's a little mellowed out," Lewis said. "His world view consisted of politics. He had to reinvent himself.
"