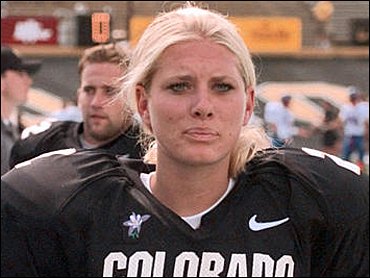 A female kicker's claim that she was raped by a University of Colorado football teammate four years ago has sent shockwaves through a program already rocked by sexual assault accusations.

Katie Hnida makes the allegation in the upcoming issue of Sports Illustrated, saying she wanted to come forward now because of the school's other problems. She said she didn't tell police when it happened in the summer of 2000 because she was too frightened.

She issued a statement Tuesday through the University of New Mexico, where she is a student, to say she was "healing" from "horrors endured" while on the Colorado football team. The statement doesn't mention rape, and she says she doesn't plan to press charges. But New Mexico athletics spokesman Greg Remington said the statement was intended to confirm the Sports Illustrated report.

Another woman told police more than a year ago she was raped by a CU football player, The Denver Post reported Tuesday.

There was no investigation because the woman did not want to press charges, Boulder County District Attorney Mary Keenan said.

"If and when she decides to come forward, I will support her in doing so, but I respect people's privacy," Keenan told the newspaper.

In light of recent events, the university plans to hire a new special administrator who will be a watchdog over the athletics department.

University president Elizabeth Hoffman said she and chancellor Richard Byyny trust athletic director Dick Tharp and football coach Gary Barnett, and Barnett said he was surprised by Hnida's allegation. He issued a public plea for her to provide him names, so that he could investigate.

Barnett, who last fall called Hnida "a distraction to our team," said he was told of the alleged assault for the first time this week by a Sports Illustrated writer.

"It would help to know names, situations," Barnett said. "We could certainly delve into it a lot more deeply and a lot more seriously. Not that we're not doing it seriously now. But we just don't know where to go with it. But we will as soon as somebody tells us."

Last August, Hnida, 22, said she was a target of sexual harassment when she was at Colorado but did not mention rape. She told Sports Illustrated, however, that she was assaulted in 2000 at a teammate's home.

"For one thing, she's a pioneer, one of the first females ever to play college football. She didn't want to show up in the papers as, 'Hey, I can't take it.' That's one thing," Reilly said on the Early Show. "The second thing, she wanted to kick. I don't know a man or woman -- I have never known anybody that loved football as much as her. She wanted to kick and thought she would be kicked off the team. Third of all, she was threatened by guys that outweigh her by 100 pounds. Even today I think she's scared if she comes forward with this, she'll be attacked, hurt, raped again. She's scared. She finally said, 'This is the only way I'm going to get over this.'"

Hnida did not try out for the Buffaloes in 2000 after Barnett said he told her she would have to beat out other kickers for the job. Last fall, Hnida said she didn't return for several reasons, including "an incident during that summer."

Hnida later became the first woman to compete in a Division I-A football game when she attempted an extra point for New Mexico in the 2002 Las Vegas Bowl.

Hnida's claims were the newest addition to a growing list of allegations against a program that CU officials have vehemently defended as well-run.

Three other women earlier sued the school in federal court, saying they were raped by players or recruits at or after an off-campus party in December 2001.

No assault charges have been filed in those cases, but Boulder County prosecutor Mary Keenan said in a deposition for one of the lawsuits that she believes the football program uses alcohol and sex to entice recruits.

The school then selected an outside panel to handle a comprehensive investigation when Gov. Bill Owens threatened to do that himself.

On Tuesday, Hoffman warned that the stakes are high.

"Everyone's job is at risk," she said.

She said she and Byyny cannot be in the athletic department daily while trying to "perhaps save the university from imminent financial ruin" so they need some help.

She said they need an administrator with experience at a major university and with Division I-A athletics.

"We need someone with no stake in the outcome," she said.

The outside panel picked by CU Regents is led by two former state lawmakers and is to report by April 30.

It already has had its own trouble because of potential conflicts of interest. Kenneth Vardell, a retired FBI agent, resigned after regents realized he had administered a lie-detector test to a player after the 2001 party. Officials said he wouldn't be replaced and the remaining seven members could do the work.

Another commission member, Pentecostal bishop Phillip Porter, said he wouldn't resign even though some critics expressed concern over his past. He helped lead the Promise Keepers religious movement launched by former Colorado football coach Bill McCartney in the 1990s.