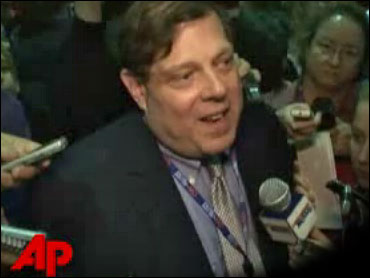 Political Players is a continuing conversation with the leaders, consultants and activists who shape American politics. This week, CBS News' Brian Goldsmith talked with Mark Penn, a top strategist to both Clintons, about the state of the Obama campaign, and the appeal of Sarah Palin.


CBSNews.com: Sen. Obama is struggling and, in some states, dropping in the polls. Sen. McCain now has higher favorable ratings. How serious is this decline?

Mark Penn: Well, I think you're seeing a real decline after the two conventions. I think after the Democratic convention, Obama had a significant lead, indicating he had a good message. And then after the Republican convention, they reversed it. A fair reading of the polls would be that the race now is basically undecided. And [voters are] going to want to kick the tires on both campaigns and both candidates a bit more.

CBSNews.com: And what does kicking the tires on the Obama campaign involve? What would you examine if you were working there?

Mark Penn: The important thing for the Obama campaign is that they not repeat some of the errors of the last two [Democratic] campaigns that happened after the two conventions. It's important not to go back toward the base, as I think both Gore and Kerry did, but to stay on the convention message that was more in the center.

It was more about tax cuts and strengthening the economy. I think it was a message that was resonating. And so what happens in a situation like this is everybody rushes in with different pieces of advice. And it can be very hard to stay the course.

CBSNews.com: One of the pieces of advice that was offered by your former business partner Doug Schoen is that the Obama camp has gotten away from their message and needs to get back on it. But is that hard to do in this media environment?

I think it's hard to present in this environment. But, nevertheless, if you schedule a series of speeches and you execute them — if there's one thing the Obama campaign has been able to do throughout the course of the last year and a half, it's been able to have a success by giving a serious speech on the serious issues of the day. And I think that's the most important place for them to go right now.

CBSNews.com: There are reports of a sense of déjà vu among some Democrats, the worry that yet again a presidential campaign may be slipping away from them, as you described in 2004 and in 2000. Do you worry the Obama campaign was unprepared for McCain's offensive?

I think these polls will settle down close to even. And I think the real important thing is not to overreact, not to be caught in a back-and-forth with Palin, but to get your candidate rising above it.

In the '96 campaign, we stuck very strongly to making the arguments of what the country needed for the 21st century. And then on the air we very strongly made a contrast between the policy differences, what would happen to things like Medicare and Medicaid if the country went in another direction.

And I think it's important for the Obama campaign to stick to the policy differences, get back there, show the different lives that Americans would have. And it's not easy in this environment. I fully recognize that.

CBSNews.com: Our poll still shows about one in five Hillary Clinton voters saying they're going to support John McCain. What arguments do you think the Obama camp have to make to turn that around?

Mark Penn: I think the best argument to get those voters is that he's going to follow a really strong but sensible course in terms of turning around the economy. I think a lot of those voters, particularly the downscale voters who saw Hillary Clinton as a champion for them, are looking for someone who's going to be able to champion their cause, particularly in the economic area. And I think that's the best way for him to win them. I think that the Republicans are trying to get him involved in the crossfire of personal issues. And I think the best thing to do is to get out of that.

CBSNews.com: Some Obama supporters have said those people were never going to support him. They were essentially anti-Obama voters in the primary. They weren't even pro-Hillary. How do you respond to that?

Mark Penn: The question now is, are they going to support McCain or Obama? What we're seeing here in the polls is, after his convention, Obama went up to 50 percent. After the Republican convention, McCain got close to that. It shows that there is a swing group of voters here. I think a substantial number of them would have been Hillary voters, who are open to both candidates, and enough voters open to both candidates to take the race either way.

CBSNews.com: During the primaries a number of Clinton aides said that the worry about Obama is that he wouldn't be able to handle the "Republican attack machine" that would hammer any Democrat in a general election. Do you think that warning was prescient?

Mark Penn: I think it is a very strong campaign that has survived considerable ups and downs. And we had a considerable number of sideshows during the primaries as well. I think the big difference now is that his campaign is not working against other Democrats.

CBSNews.com: To what extent do you think Palin's appeal to a lot of swing voters means that they vote for McCain? Or is the old adage still true that people vote for the top of the ticket?

I think she clearly has energized the Republican Party in a way that they were not energized and that party members were very worried that McCain was going to choose somebody who wouldn't have the more conservative values that the mainstream of the Republican Party has. Whether or not she's really going to play or is playing a big role with swing voters, that remains to be seen. I think that's a lot less clear.

CBSNews.com: Your former colleague Howard Wolfson argued that you all unintentionally paved the way for Palin by exposing some of the unfair media coverage that Hillary Clinton received. And, therefore, a lot of the media may now be treating Sarah Palin with kid gloves. Do you agree with that?

Mark Penn: Well, no, I think the people themselves saw unfair media coverage of Senator Clinton. I think if you go back, the polls reflected very clearly what "Saturday Night Live" crystallized in one of their mock debates about what was happening with the press.

And I think that that's a real problem growing out of this election. The media now, all of the media — not just Fox News, that was perceived as highly partisan — but all of the media is now being viewed as partisan in one way or another. And that is an unfortunate development.

CBSNews.com: So you think the media is being uniquely tough on Palin now?

Mark Penn: Well, I think that the media is doing the kinds of stories on Palin that they're not doing on the other candidates. And that's going to subject them to people concluding that they're giving her a tougher time. Now, the media defense would be, "Yeah, we looked at these other candidates who have been in public life at an earlier time."

What happened here very clearly is that the controversy over Palin led to 37 million Americans tuning into a vice-presidential speech, something that is unprecedented, because they wanted to see for themselves. This is an election in which the voters are going to decide for themselves. The media has lost credibility with them.

CBSNews.com: Joe Biden said this week that Hillary Clinton might have been a better pick than he was. Do you think that's true?

CBSNews.com: Well, that's what he says. What do you think?

Mark Penn: I'm going to leave that one where it is.
By Brian Goldsmith