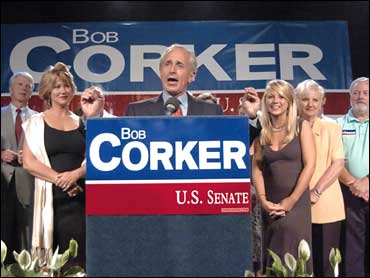 Corker will face Democratic U.S. Rep. Harold Ford Jr. in November. Ford, who had no serious opposition in the Democratic primary, had 262,115 votes, or 80 percent, with 82 percent of precincts reporting.

Ford, who hosted a Nashville fundraiser Thursday night with former President Clinton, would be the first black U.S. senator elected in the South since Reconstruction.

"I thank Harold Ford for having the courage to believe in Tennessee enough to make this campaign," Clinton said.

There were no surprises in the gubernatorial primary as Democratic incumbent Gov. Phil Bredesen won easily, and Republican state Sen. Jim Bryson was headed toward victory.

Political observers have said Tennessee is one of six seats that the Democrats would have to win if they hope to take control of the Senate in the Nov. 7 general election.

Corker, 53, led the Republicans in fundraising, collecting $6.6 million from outside sources and funneling in more than $2 million of his own money. Bryant and Hilleary each raised about $2.2 million.

Hilleary and Bryant, who both arrived in Congress during the 1994 Republican Revolution, questioned Corker's conservative credentials throughout the race, particularly on abortion.

During an unsuccessful run for the U.S. Senate in 1994, Corker said he was personally opposed to abortion, but didn't believe it was a government issue. He now says he opposes abortion rights.