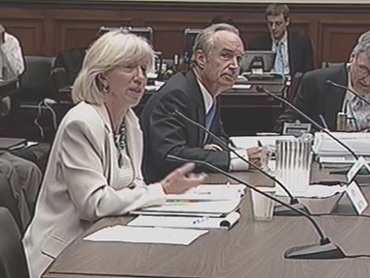 Two former Interior Secretaries told a Congressional hearing today that the past safety record of offshore oil exploration in the United States led them and other government officials to consider a spill of the magnitude that has swamped the Gulf of Mexico for the last three months as unthinkable.

"All of us - present and former Administration officials, Governors, Members of Congress and citizens - never contemplated an accident of this magnitude could ever happen," said Dirk Kempthorne, who served as Interior secretary from 2006 to January 2009 under President George W. Bush.

"Had we thought so, I am confident that both the Executive and the Legislative Branch would have worked on a bipartisan basis to prevent it."

In testimony today before a joint subcommittee hearing of the House Energy and Commerce Committee, Kempthorne said that in his previous appearances before Congress - during his confirmation hearings and in later testimony - he did not recall ever being asked about major oil spills.

In fact, he said, the opposite occurred: He recalls being pointedly asked why Interior wasn't doing more to expand offshore energy development, not less.

"In part, this concern was driven by the then-soaring $4-a-gallon gasoline prices," he said.

Kempthorne also pointed to lawmakers for writing the Gulf of Mexico Energy Security Act (signed into law by President Bush in 2006), legislation which he said "contains no reference to needing to do additional work to prevent oil spills or expand capability to respond to oil spills."

He said the law was "one indication that an oil spill of this magnitude could never have been imagined."

He also suggested the belief that industrial accidents posed little threat was backed by the fact that, during the eight years of the Bush administration, natural seepage of oil from the ocean floor exceeded oil spills from drilling operations by 150%.

He said environmental impact assessments and oil spill response plans were based on the probability that a significant oil spill was small, given historical information and models.

Kempthorne testified that when the 2007-2012 five-year plan for offshore drilling was written, "there had not been a major oil spill in 40 years.

"One very real consequence of the Deepwater Horizon accident is that these historical assumptions will be forever changed," he said. "All future environmental impact statements will have to take this fact into account, as well as change the probabilities of such accidents occurring." 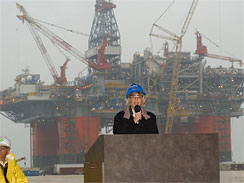 (MMS)
Gale Norton, who was President Bush's Interior Secretary from 2001-2006, said the industry had a remarkable safety record, including during Hurricanes Katrina and Rita in 2005, when she said the release of oil from damaged or destroyed platforms and pipelines was "still relatively small."

Norton testified that prior to the Deepwater Horizon accident, the energy industry had an incentive to operate safely, so as not to repeat the disasters of the Santa Barbara and Exxon Valdez oil spills. She said failures in those incidents, coupled with regulations, ensured that careful planning and adequate safety precautions were employed.

"That formula worked well," Norton said. "Three months ago, and for the many years preceding, the regulatory and response structure was based on a past history of success,"

She said offshore exploration plans under both Republican and Democratic administrations were drawn against that backdrop of a long safety record.

Opening Statement by Gale Norton
"Not One Drop Of Oil Spilled"? Not Quite

But the matter of regulators - what they did or didn't do - was the subject of today's hearing. Committee Chair Rep. Henry Waxman, D-Calif., said that serious mistakes were made by Interior under Presidents Bush and Obama. "The cop on the beat was off-duty for nearly a decade," said Waxman.

He said that beginning with Vice President Dick Cheney's energy task force, in which oil and gas industry officials met in secret at the start of Mr. Bush's first term, the government sought to expedite energy production, with less priority to safety than to economic incentives and royalty programs favorable to industry.

Expected to appear later today is the current Secretary of the Interior Ken Salazar.

For more info:
Hearing: The Role of the Interior Department