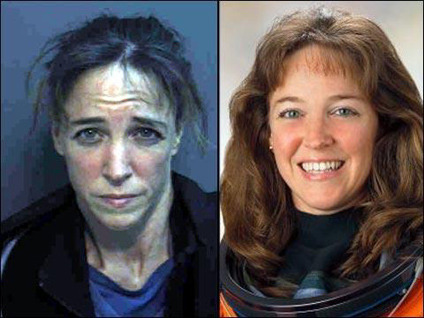 ORLANDO, Florida - A former astronaut banished from NASA after she attacked a romantic rival is being kicked out of the Navy, officials said Thursday.

Capt. Lisa Nowak will retire with an "other than honorable" discharge and her pay grade will be knocked down one rank, Assistant Secretary of Navy Juan Garcia said in a statement.

Nowak's conduct "fell well short" of what is expected of Navy officers and she "demonstrated a complete disregard for the well-being of a fellow service member," Garcia said.

Nowak was accused of confronting Colleen Shipman in the parking lot of the Orlando International Airport in February 2007 after driving from Houston. She had diapers in the car, but Nowak disputes she wore the diapers. Shipman, an Air Force captain, had begun dating Nowak's love interest, former space shuttle pilot Bill Oefelein.

Nowak was sentenced in 2009 to a year of probation in the attack after pleading guilty to burglary charges.

Since her dismissal from the astronaut corps, Nowak has been working at the Chief of Naval Air Training station in Corpus Christi, Texas. Her retirement takes effect Sept. 1.

The "other than honorable" discharge may affect veterans' benefits for Nowak, who has been in the Navy for 20 years. A call to her cell phone was not returned.

The decision by the Navy came after a board of inquiry heard testimony last year.

"Our rule is to make the right decision," said Lt. Alana Garas, a Navy spokeswoman. "There was a lot of material associated with this case."

Newspaper from 1947 offers "amazing glimpse" at UFO incident in Roswell
Thanks for reading CBS NEWS.
Create your free account or log in
for more features.
View CBS News In
CBS News App Open
Chrome Safari Continue
Be the first to know
Get browser notifications for breaking news, live events, and exclusive reporting.