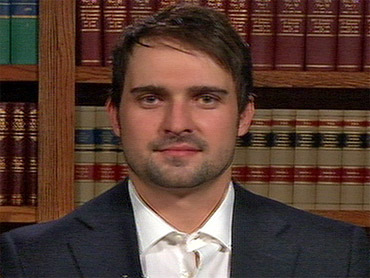 An associate of Richard Heene who briefly worked with him on an idea for a reality show says Heene was consumed by his desire for fame and attention.

"He was very interested in being famous," Robert Thomas told CBS' "The Early Show" Tuesday.

Thomas told sheriff's investigators about what he observed between amateur storm chasers Richard and Mayumi Heene when he helped record Richard Heene's ideas earlier this year. Thomas earlier sold his story to the Web site Gawker.com.

In his story for Gawker, Thomas says Heene "was often driven by ego and fame. He was all about controversy, hoping to whip up something significant enough to eliminate our reality TV competitors."

An investigation continues into possible criminal charges for the Colorado couple who told authorities their son floated off in a balloon shaped like a flying saucer has spread to those who worked with them.

Investigators on Monday pored over e-mails, phone records and financial documents from the Heene home.

The Larimer County sheriff's office said its findings will be forwarded to prosecutors next week to decide if Richard and Mayumi Heene should be charged with falsely reporting that their 6-year-old son, Falcon, had drifted away in a large home-built helium balloon to drum up publicity for a reality TV show.

Sheriff Jim Alderden said documents show that a media outlet had agreed to pay the Heenes. However, it was unclear if the outlet was a conspirator. Alderden didn't name the organization.

The Heenes apparently wanted to star in a reality show focusing on a range of bizarre experiments, such as trying to attract UFOs with a weather balloon. Thomas worked with Richard Heene on the idea for the show from March until May.

Sheriff's officials interviewed Thomas on Sunday, after he revealed that Heene was planning a media stunt to promote the show, Lee said.

Lee said investigators told her Thomas would not face charges, but she was seeking immunity for him "just to be safe." Thomas has said he had no idea that a possible hoax would involve the Heene children.

Richard Heene's attorney, David Lane, declined to say directly whether he believes the incident was a hoax but said the Heenes are innocent until proven guilty. The Heenes didn't comment Monday.

Mayumi Heene's lawyer, Lee Christian, declined to comment on whether the couple still maintains they thought their son was in the balloon before he emerged at home and told reporters he'd been hiding in the garage.

Alderden said the children were still with the parents and that child protective services had been contacted to investigate their well-being.

Alderden said charges he is seeking against the Heenes include conspiracy, contributing to the delinquency of a minor, making a false report to authorities, and attempting to influence a public servant. The most serious charges are felonies and carry a maximum sentence of six years in prison. Alderden said authorities also would be seeking restitution, though he didn't have an estimate.

It is unknown who else may have been working with Heene to launch the reality show.

Heene has a profile listed on a Web site that helps people get cast in reality shows, and the site said he last logged on in late September - around the time investigators said the hoax was taking root. The site lists his occupation as a research scientist and general contractor with a high school education.

The Heenes twice appeared on ABC's "Wife Swap," including a March episode in which they discuss their approach to parenting and talk about their belief that they're the descendants of aliens.

The producer of "Wife Swap" had a show in development with the Heenes but said the deal is now off. The TLC cable network also said Heene had pitched a reality show months ago, but it passed on the offer.