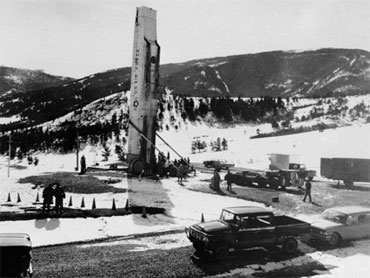 Whatever the mysterious lights in the sky were, they seemed to have an interest in our nukes.

One of the more out-of-the-ordinary press conferences held in Washington this week consisted of former Air Force personnel testifying to the existence of UFOs and their ability to neutralize American and Russian nuclear missiles.

Star & Stripes quoted former Air Force Capt. Robert Salas, who was at Malmstrom Air Force Base in Montana in 1967 when 10 ICMs he was overseeing suddenly became inoperative - at the same time base security informed him of a mysterious red glowing object in the sky.

Robert Jamison, a retired USAF nuclear missile targeting officer, told of several occasions having to go out and "re-start" missiles that had been deactivated, after UFOs were sighted nearby.

Similar sightings at nuclear sites in the former Soviet Union and in Britain were related.

Speaking at Monday's press briefing, retired USAF Col. Charles Halt said that in December 1980, when he was deputy base commander at RAF Bentwaters, strange lights in the forest were investigated by three patrolmen.

Halt said they reported approaching a triangular craft, "approximately three meters on a side, dark metallic in appearance with strange markings. They were observing it for a period of time, and then it very quickly and silently vanished at high speed."

Two nights later, Halt investigated another sighting near the base when he was told by the base commander, "It's back."

Halt found indentations in the ground, broken branches, and low-level background radiation. He and his team also witnessed various lights moving silently in the sky, of one which was "shedding something like molten metal." Another shined a beam of light down towards them.

The incidents were never officially explained.

Several of the ex-servicemembers speaking Monday said when they'd brought their concern of such appearances to superiors, they'd been told it was "top secret" or that it "didn't happen."

Hastings suggested the presence of such phenomena meant that aliens were monitoring our weapons, and perhaps warning us - "a sign to Washington and Moscow that we are playing with fire," as he was quoted in the Telegraph.

Hastings predicted a "paradigm shift" in the mindset of humanity owing to the existence of alien life.

"Traditional institutions such as religions, governments, other social institutions may be threatened by what is coming. That is just the logical consequence of what is about to occur."

The U.S. Air Force ended its 22-year-long "Project Blue Book" investigation of UFO sightings after investigating 12,618 sightings; all but 701 were explained, and the reminder categorized as "unidentified" due to sketchy
reports, a Pentagon spokesman said in 1997.

"We cannot substantiate the existence of UFOs, and we are not harboring the remains of UFOs," said Pentagon spokesperson Kenneth Bacon in 1997. "I can't be more clear about it than that."