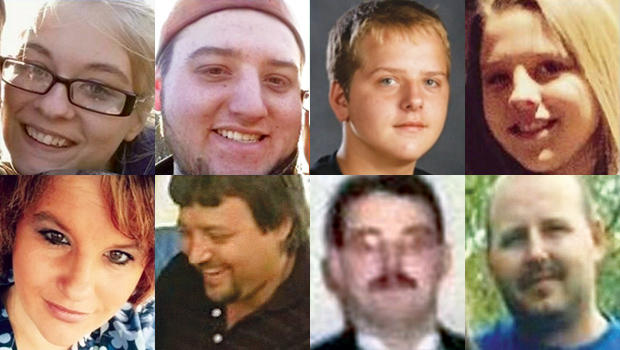 WAVERLY, Ohio -- Authorities have charged the brother of one of the eight relatives slain in an unsolved Ohio massacre with tampering with evidence and vandalism, accusing him of destroying a GPS device.

The Ohio attorney general's office on Tuesday announced the charges against 40-year-old James Manley, of Peebles, in southern Ohio.

Authorities say Manley destroyed the device being used in the investigation of the slayings. Manley is the brother of victim Dana Rhoden.

Manley's phone is disconnected, and online court records don't list an attorney. Manley's father, Leonard Manley, told the Cincinnati Enquirer his son would turn himself in.

No arrests have been made in the April 2016 slayings of eight members of the Rhoden family – seven adults and one teen boy. They were found shot at four homes near Piketon, about 70 miles south of Columbus. Three children were found unharmed.

Authorities have executed several dozen search warrants in the lengthy investigation. One of the most recent was issued in April and allowed investigators to put a tracking device on a truck driven by James Manley, according to the Cincinnati Enquirer, which obtained a copy of the warrant.

The warrant indicated that investigators believe the truck was used in connection with an aggravated murder or by a person intending such a crime, but it doesn't specify a connection to the Rhoden homicide investigation, and it doesn't name the man as a suspect, the newspaper reported.

Leonard Manley told the paper his son was at his logging job Tuesday when Ohio Bureau of Criminal Investigation agents showed up at his home to take the GPS device they had earlier installed off his son's truck. But, Manley said, he told them that his son discovered the device about a week earlier and took it off the underside of his truck, the paper reports.

Authorities searched multiple sites in connection with the investigation late last week, taking a trailer linked to the family of one victim's ex-boyfriend. Bernie Brown, who owns property in Peebles where the trailer had been stored, said its owners needed a place to keep household items after recently selling their Adams County farm.

Whatever significance the trailer might have hasn't been publicly disclosed. The Pike County sheriff and the Ohio attorney general's office won't discuss details of any searches or other parts of the investigation.

No arrests have been made, and family members have pleaded for anyone with information that might help solve the case to come forward.

Leonard Manley, whose adult daughter and grandchildren were slain, said he wants justice, but it seems to him that investigators are "grasping at straws."

"It's like a wound and then you pick at it," he told the Enquirer, "and they are starting to pick pretty hard."