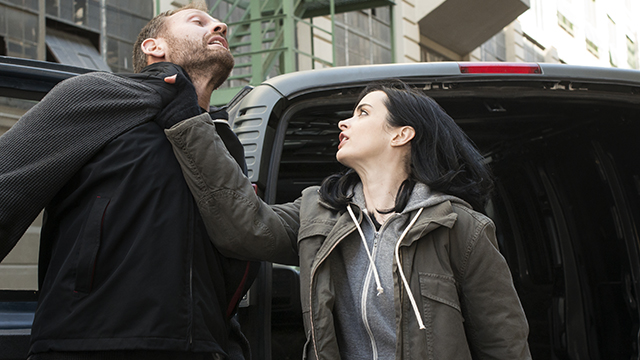 All 13 episodes of Netflix's second Marvel series went live at 12:01a.m., so you have already had plenty of time to meet the titular former superhero-turned-private investigator. If you're diving in later on -- or if you don't know who Jessica Jones is -- here's your essential guide to starting the new series.

1. First of All, Who Is Jessica Jones? If you don't read Marvel comics, you may not know her name. She was the star of Marvel's first-ever adult comic book, "Alias" by Brian Michael Bendis and Michael Gaydos. As mentioned above, she is a failed superhero who starts her own investigation agency. She drinks, she cusses, she has sex. Captain America, she is not. And that's all you really need to know about her, aside from the fact that she's played to perfection by Krysten Ritter.

2. It's an Origin Story in Reverse: It's not explicitly stated at the beginning of the series how Jessica got her powers -- she says an "accident" -- and when we meet her, she is already in control of her super strength and "jumping" (not flying). Instead of unraveling the origin of how she becomes a superhero -- she already was one and it went horribly, horribly wrong, which we see in a flashback episode midway through the first season -- the show is about how she reclaims her life post-origin story. It's opposite of what you're used to.

Still, there's some fun with her superhero alter-ego, Jewel. And as Melissa Rosenberg promised ET, the show does "hit" on her infamous spandex suit in episode five, in a hilarious scene that doubles as commentary on how most female heros are treated in comics.

3. It's Not Daredevil Season 1.5: If you were hoping that Jessica Jones would pick up right where the first season of Marvel's "Daredevil" left off and take us right to the beginning of season two, know that this is its own thing. In fact, The Man Without Fear isn't even mentioned in the first seven episodes.

In its tone alone, "Jessica Jone"s is differs vastly from her big brother. Whereas "Daredevil"was a crime drama first, "Jessica Jones" is a psychological thriller. A closer comparison might be made to Veronica Mars, with its female detective, wry voice over and noir overtones.

4. And Kilgrave Is No Wilson Fisk: Vincent D'Onofrio as the Kingpin was one standout of "Daredevil's" extraordinary first season, though Fisk's motivations and what exactly his evil plan entailed occasionally seemed, err, muddled. The villain here is much more straightforward: Kilgrave, played as charmingly wicked as possible by David Tennant, wants to use his mind control powers to ruin Jessica's life.

5. It's Devastating...but VERY Funny: "Jessica Jones" isn't quite as dark and gritty as Daredevil was, and it certainly isn't as violent. (Or at least not as realistically, horrifyingly violent.) But it is still dark and is not afraid to "go there": especially in the themes that it expertly handles, including violence against women, sexual assault, and rape.

But Jessica, the character, is also very, very funny. She has plenty of one-liners that will instantly be GIF-ed. One of our favorite bits? One of Jessica's cohorts says that if a mission goes wrong he'll shoot her, to which she responds, "I was going to say dart gun me, but sure, shoot me in the head."'

6. The Avengers Connections Continue: Season one of "Daredevil" took place in the wake of the Attack on New York from the first Avengers film and contained plenty of references to Marvel's big screen heroes. Jessica Jones makes some offhand references to "the big, green guy" (that's the Hulk, of course) and his team and the aliens that Loki sent to NYC.

"Daredevil" gave us a glimpse into how the entire city was coping in the wake of the death and destruction of that attack, while Jessica Jones focuses on the individuals, with one episode specifically focusing on a woman who lost someone due to superhero destruction.

7. Keep Your Eyes Out for Other Easter Eggs: If you aren't familiar with Jessica Jones herself, this one might be a little trickier. But there are plenty of Easter Eggs from the comics hidden in these episodes. From the obvious -- like Luke Cage's signature phrase, "Sweet Christmas!" -- to more obscure. We will tip you off to one: At one point, Jessica recommends another P.I. named Angela Del Toro. Fans of the comic books know that's White Tiger, who wears an amulet that gives her super strength, speed, and martial arts skills.

8. Anything Else I Need to Know? Rachael Taylor, playing Jessica's best friend Trish Walker (aka Patsy Walker aka Hellcat) is a standout and her future superhero origins are teased from the start. Also, feel free to fall in love with Mike Colter's Luke Cage -- which isn't hard to do -- as he will be the next hero to get a Netflix series.

Otherwise, binge away. Just know, once you start, you won't be able to stop.

Plus, Charlie Cox takes you behind the scenes of "Daredevil's" first season: