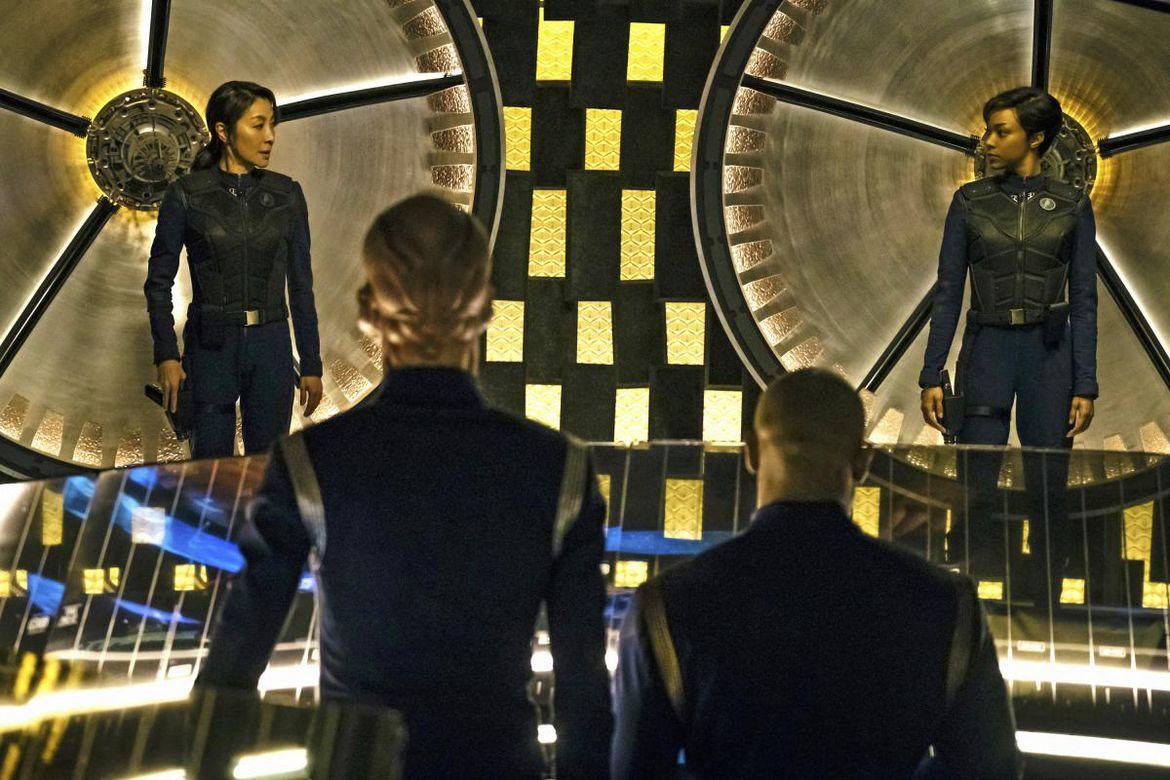 Get ready for aliens, starships and all new space adventures. The next chapter in the Star Trek universe arrives on Sept. 24 with the premiere of "Star Trek: Discovery," a prequel CBS series that takes place about a decade before the five-year mission of the original 1960s "Star Trek." Here are all the important details we know so far. (Disclosure: CBS is CNET's parent company.)

In a Star Trek first, the lead role will be a first officer, not a captain. Sonequa Martin-Green of "The Walking Dead" takes on the character of First Officer Michael Burnham. Showrunner Aaron Harberts revealed some of Burnham's backstory to Entertainment Weekly: The character is the first human to attend the Vulcan Science Academy. The series starts with her as the first officer of the USS Shenzhou, a plot point that appears in the show's trailer, but she ends up serving on the USS Discovery under Captain Gabriel Lorca, played by Jason Isaacs of "Harry Potter" franchise fame.

Martin-Green revealed in July her character was raised from a young age on Vulcan by Spock's father Sarek and his mother Amanda Grayson, which would essentially make Burnham Spock's adopted sister. We will have to wait to see how Burnham's absence from Star Trek canon so far is explained in the show.

The USS Discovery may get top billing, but there's another key Federation starship in play for "Discovery." The Shenzhou is helmed by Captain Philippa Georgiou (Michelle Yeoh from "Crouching Tiger, Hidden Dragon").

We get some good looks at the Shenzhou in the trailer and in an early peek at the ship's intriguingly designed transporter room, but the Discovery, registration number NCC-1031, is still pretty much under wraps for the moment. We do know what it looks like from the outside based on an early teaser. It has an iconic saucer section and dual nacelles, but with a much flatter overall design than the first USS Enterprise.

The show's time period makes it ripe for introducing earlier versions of characters made famous by the original "Star Trek." So far, we know Spock's father Sarek will appear, with actor James Frain ("Orphan Black" and "Grimm") taking over as the younger Vulcan. This makes sense knowing Burnham spent a lot of time on Spock and Sarek's home planet. Sarek's presence also hints that Amanda Grayson, Sarek's human wife and Spock's mother, could show up.

Conman and criminal Harry Mudd, who guest-starred in two episodes from the original series, will also show up in the first season, this time with "The Office" actor Rainn Wilson in the rakish, trouble-making role. Both Mudd and Sarek should provide a strong link to the existing Star Trek canon.

There will be Klingons

The most famous aliens in the Star Trek universe will figure prominently in the first season of "Discovery." In the trailer, Shenzhou's Captain Georgiou announces, "Contact Starfleet Command. We have engaged the Klingons."

What really stands out in the trailer is the radical redesign of the Klingons' look. They're different from the early original Klingons (known for looking more human-like) and the later Worf-style Klingons with ridged foreheads and luxurious hair.

These Klingons seem to be hairless, have deep furrows across their entire faces and sport almost Gothic-looking outfits while hanging out in ornate rooms. They wouldn't look out of place on "Game of Thrones."

The late-August teaser above highlights the ridges and spikes on the new Klingon uniforms and includes a voice-over with this hint as to the aliens' motivations: "We must fight for one thing above all: To remain Klingon."

Klingons and Vulcans have long been established in Star Trek, but "Discovery" will also introduce us to an entirely new race as Doug Jones ("Hellboy," "Pan's Labyrinth") takes on the physically challenging role of Kelpien Lt. Saru, the Discovery's science officer. Kelpiens have hoofed feet. Special shoes give the already tall Jones a lilting, gazelle-like walk to go along with a sculptural face.

We know from a "Discovery" trailer that Kelpiens are "biologically determined" to sense the coming of death. That makes it sound a little like Kelpiens are a more goth version of the telepathic Betazoid aliens from "Star Trek: The Next Generation." The actual explanation is Kelpiens are a prey species on their home planet and are under threat from a more dominant predator species. That has required them to develop high-level survival instincts.

John Cho's Hikaru Sulu in the reboot Star Trek movies is gay, a decision that attracted some controversy based on the character's history. As we learned at Comic-Con in July during the "Discovery" panel, the series will feature Anthony Rapp in the role of openly gay Lt. Paul Stamets, an astromycologist (fungus expert) on board the Discovery. Stamets' partner is the ship's medical officer, Dr. Hugh Culber (Wilson Cruz).

"You see my character in a relationship with my partner, who's a man," Rapp told TV Guide. "And there's no commentary about it, and there's no issue about it among my captain or my crewmates or anything like that. It just is."

The new Federation uniforms sport clean lines and metallic accents that hint at some of the details of the very first "Trek" uniforms, but feature a much more refined, futuristic design than those sported by Captain Kirk, Spock and Doctor McCoy. These outfits make sense as an evolution of the uniforms seen in the "Enterprise" prequel show.

The trailer drops some hints

The two-minute first-look trailer tells us the USS Shenzhou is visiting "the edge of Federation space." Burnham is in contact with a hologram version of Sarek, who seems to be a mentor figure to her. There appears to be a flashback scene depicting Burnham as a young child on Vulcan, showing her deep history with the desert planet.

The trailer also generates a lot of questions. Are Burnham and Georgiou strolling around on Vulcan? Who's the "great unifier" Sarek refers to? What's the "object of unknown origin?" And what's in that crazy floating sarcophagus-looking thing the Klingons have?

Expect "Discovery" to embrace a serialized storyline spanning its episodes, rather than a fully contained story-of-the-week format. That will make it more spiritually akin to "Star Trek: Deep Space Nine" than the Kirk-led series or "The Next Generation."

Burnham's journey and character development will be key to the new show. CBS sums up the season by saying "'Star Trek: Discovery' will follow the voyages of Starfleet on their missions to discover new worlds and new lifeforms, and one Starfleet officer who must learn that to truly understand all things alien, you must first understand yourself."

How to watch the new Star Trek

The debut season of "Discovery" will span 15 episodes, with the premiere episode appearing on CBS broadcast television in the US on Sept. 24 and the rest streaming through the CBS All Access subscription service. Canadian viewers can catch it on the Space channel. Fans outside the US and Canada will be able to watch the show through Netflix.

The first season is divided up into two chapters with the first eight episodes playing through Nov. 5 and the second half picking up in January 2018.