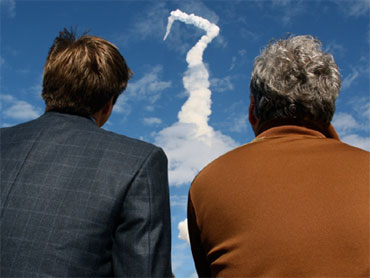 In "Everybody Has a Story," every two weeks someone threw a dart at a map of America. CBS News correspondent Steve Hartman then went wherever it stuck, flipped through the local phone book, and picked a name at random. He then did a story on someone at that house.

Tonight, Hartman brings back his series, and expands it in "Everyone in the WORLD has a Story."

In a storeroom at CBS, behind a bunch of old office furniture - There's a remnant of my former life: a map of America with exactly 123 holes in it. One hundred twenty three holes were created over the course of 7 years -- in an effort to prove that everybody has a story.

As some of you may remember, I used to go wherever the dart hit- then I'd stick my finger in the phone book and do a story on that person - no matter who they were - or what they had to say.

Everybody Has a Story, Editor's Picks

It was a wildly unpredictable adventure - but by trusting fate, we got to see a part of America that news too often ignored - the real America.

I stopped chasing darts 6 years ago - but recently decided the time was right to bring back the basic premise - this time not to show who we really are -- but to show who they really are - to randomly pick and profile some of the other residents of planet earth.

Last November, when the shuttle Atlantis took off from the Kennedy space center, it was not only carrying supplies for the international space station, it was carrying a special payload for us -- a plastic inflatable globe - that Commander Jeff Williams would use to select our random locations.

About the International Space Station

Obviously, NASA scientists don't normally work on social experiments like ours, but the agency says it wanted to be part of this -- partly because it's the one thing all astronauts have always been curious about when they look out that window.

"We often wonder what those people are doing, what they think, how they live," said Williams. "Is it much different that us or are there a lot of things in common?"

After traveling a couple thousand miles and meeting people from all walks I have to say the comparison between us and them is striking.

Where as in the States I found stories about life-long passions, the importance of family, and the struggle to achieve their version of the American dream.

In other countries, I found stories about life long passions, the importance of family, and the struggle to achieve the American dream.

Turns out, if you look very closely at our planet down here, it looks a lot like it does from way out there -- wonderfully indiscernible.

Over the next few weeks - we're going to hear those people's stories.

Starting next Monday night, when Commander William's random stab at the globe sends us to Asia .. to what Mark Twain called "the most extraordinary country the sun visits on its rounds" -- India -- specifically, a town a couple of hours southwest of New Delhi call Rewari -- where fate found me with a flour shop owner - as he turned wheat into flour.

He and his shop are just the first stop in our month-long, planet-wide adventure to prove everyone in the world has a story.

CIA director: Putin's military has many problems, "manpower only one of them"
Steve Hartman