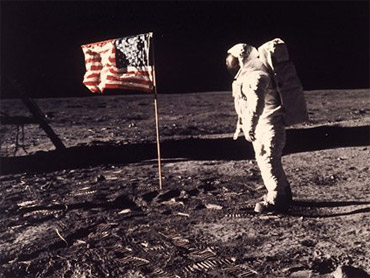 Forty years ago this weekend, CBS News anchor Walter Cronkite was live on the air for 18-straight hours, keeping everyone on the edge of their seats watching something literally out of this world, as man landed on the moon for the first time.

Astronaut Neil Armstrong was the one who uttered the famous words, "The Eagle has landed," telling the world a manned spacecraft was on the lunar surface.

At that point, Cronkite said simply, "Whew, boy." He often spoke about being speechless at that moment.

Cronkite, the legendary CBS News anchor, died Friday at 92 after a long illness.

And on "The Early Show Saturday Edition" Aldrin and fellow space pioneer John Glenn, who's also a former senator from Ohio, remembered the man who well-known as a huge believer in and fan of the United States space program.

Aldrin said he'd just been at the National Aviation Hall of Fame in Dayton, Ohio when he heard that Cronkite had passed away. "All of us of course were very saddened for such a trusted voice to have passed on."

Aldrin recalled that, after returning to Earth, "We were on the aircraft carrier in quarantine when they showed us some film of the reactions back on here when we landed on the moon. And the people cheering and, of course, interspersed with that was the broadcast with Walter. ... That was a very (good scene) with Walter and his glasses on his forehead, mopping his brow, and I think that's one of the first times he was really speechless.

"As we saw this, it was just a (bit) striking -- I tapped Neil (Armstrong) on the shoulder and said, 'Look at all that cheering. We missed the whole thing ... as the rest of the world got to see the transmissions and the interpretations for those 18 hours."

Glenn pointed out that Cronkite covered the space program from its infancy, including his flight, the first manned mission to orbit Earth. "Then," Glenn said, "(Cronkite) came back all those years later and, at the end of 1998, covered when I went back up in space again. Walter sort of came out of retirement on that one, I think, because of his interest in the whole program. He was fascinated by the space program. (He) thought it was one of the big things that this country had ever done.

Glenn noted it isn't often mentioned that Cronkite was on the board of "Give Kids the World," which "takes terminally ill children and lets them go to Disney World as one of their last wishes. And (Cronkite) was on the Astronaut Scholarship Foundation board, too. We shared those places."