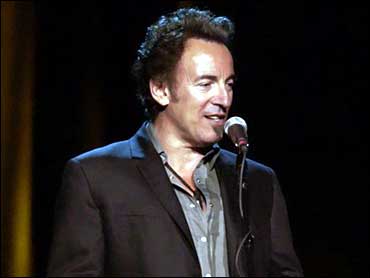 Nearly three decades after "Born to Run," with a dozen Grammys and an Oscar to show for his songwriting skills, Bruce Springsteen says he's still learning things about his music each time he steps on stage.

"I'm once again in search of different and exiting ways of voicing the material," he explained after finishing a sound check before a weeknight show in Buffalo. "If you've written good songs, sturdy songs, you find you've just scratched the surface."

From "Rosalita" through "The River" and into "The Rising," the Rock and Roll Hall of Fame inductee has consistently produced songs with such resonance. On the current solo tour supporting his "Devils & Dust" album, Springsteen has revitalized rarely played favorites such as "Point Blank" or "Wreck on the Highway" by backing himself on banjo, electric piano or pump organ.

"That's the job," Springsteen said about his live shows. "As you go along, you're bringing the music and all these characters to life every night. And you can't do it without doing it, you know? I'm not going to come out and just run through some songs, or play favorites.

"I'm in search of some life essence. That's why people come."

In addition to reinventing his classic songs, Springsteen said he's creating some new music. In the downtime between shows, particularly during his five-week swing through Europe, the Boss spent his spare time on new material.

"I spent quite a bit of time sitting and writing," Springsteen said in a telephone interview. "It was a pretty fruitful time. I'd have the guitar with me, and I'd come home and do a good bit of writing — sometimes all on one song. Two weeks go by, and I'm going page after page refining it."

Along with new music comes something completely different for Springsteen: a longer, more detailed version of his VH-1 "Storytellers" appearance at a Jersey shore theater. The one-of-a-kind solo performance will show up in stores Sept. 6, with a running time more than double the hour-long version that already aired.

It will include a previously unseen question and answer period between Springsteen and some lucky fans.

"That was quite a thing," Springsteen said about the evening spent deconstructing eight songs, offering a rare glimpse into his method of melding words and music. "I never did anything quite like it before, I don't think I've ever done that before.

"I felt it was something very singular. And it was a lot of fun."

Springsteen, 55, launched his second solo acoustic tour earlier this year after releasing "Devils & Dust," which hit No. 1 on the charts in the United States and nine countries in Europe.

Springsteen suggested the tour could be extended to include a few more dates in cities with "longtime supporters," which typically includes East Coast strongholds like Boston, Philadelphia and New Jersey.

But there was no official word yet on extra shows: "We may do a little more. There's a few cities we'll try to get back to."

Over the years, Springsteen has divided his time between band and solo records. In the last two decades, he's done just a single record with the E Street Band, while releasing the solo albums "Tunnel of Love," "The Ghost of Tom Joad" and "Devils & Dust."

Attention later this year, though, will turn to his seminal band album.

"Born to Run" was released in September 1975 — putting the 30th anniversary of its debut at the end of this summer. Springsteen, who was just a 25-year-old Jersey shore kid destined for bigger things at the time, seemed somewhat perplexed at putting that number into perspective.

"Yeah, I don't know what to make of that, except here it is," Springsteen said. "Who woulda thunk? It's kind of funny. It some ways it doesn't seem that long, but when I look back at old (film) footage it's ..."

"Well," he finally said, "time flies when you're having fun."