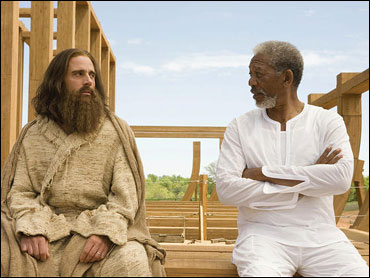 Steve Carell had the power at the box office, although not quite so much as Jim Carrey.

"Evan Almighty," with Carell taking over for Carrey in a follow-up to the comedy smash "Bruce Almighty," debuted a solid No. 1 with an estimated $32.1 million taken in at the box office during its opening weekend – very, very good, although less than half the size of the $68 million opening of its predecessor.

Released by Universal, "Evan Almighty" has Carell as a new congressman instructed by God (Morgan Freeman) to build an ark for a coming flood.

Carrey's "Bruce Almighty" was an adult comedy, while "Evan Almighty" was aimed at a family crowd, which could give it longer shelf life, said Nikki Rocco, head of distribution at Universal.

"Family films have an incredible ability to just play and play," Rocco said. "I'm very optimistic about it playing out over the course of the summer."

"Evan Almighty" needs to hold up well in subsequent weeks to make good on its $175 million budget, an enormous sum for a comedy, resulting largely from costly visual effects.

If it can hold on in theaters and then score well overseas, on television and in home video, "Evan Almighty" could earn its money back, said Paul Dergarabedian, president of box-office tracker Media By Numbers.

"Opening weekend no longer is the only barometer by which you can determine whether or not a film can turn a profit," Dergarabedian said. "If it finds life in the foreign marketplace, on home video, all those revenue streams are really important. It just has to do well in the long term, then have life after its theatrical distribution."

The Stephen King adaptation "1408," a Weinstein Co. horror tale with John Cusack and Samuel L. Jackson in the story of a man trapped in a hotel room with malevolent spirits, debuted in second place with $20.175 million.

Paramount Vantage's "A Mighty Heart," starring Angelina Jolie as the wife of kidnapped and slain journalist Daniel Pearl, had a so-so debut, coming in at No. 10 with $4 million.

Michael Moore's health care documentary "Sicko" got a head-start on its nationwide debut Friday with an early opening at one New York City theater, where it took in $70,000 for the weekend.

"Sicko" also had sold-out sneak previews Saturday night at 43 other theaters around the country, where tickets were so in demand they were being scalped for as much as $40 each, said Harvey Weinstein, co-chairman of the Weinstein Co., which is releasing "Sicko" along with Lionsgate.

The early screenings were intended to get interest focused on the movie itself, rather than publicity over a U.S. Treasury Department investigation of Moore's trip to Cuba for the film to get medical care for ailing Sept. 11 rescue workers.

When notified of the investigation in May, the filmmakers worried the government might try to seize the film or impede its release, Weinstein said.

"It's trying to get people talking about the movie, rather than the idea of the government trying to shut down the movie," Weinstein said. "It's saying to the government, `Hey, this movie is out there being appreciated by people. Think twice before you try to confiscate or take any legal action."'

Unlike most of today's blood-soaked horror flicks, "1408" offered a mix of psychological chills and engaging characters, said Bob Weinstein, co-chairman of the Weinstein Co. and an executive producer on the film.

"The movies I grew up on were like `The Exorcist,' `The Omen,' `Poltergeist.' Those were a combination of the supernatural and they kept the audience involved in the characters. That was the old-school, basic scary movie. This one is more in that vein," Weinstein said.

Like last month's "Spider-Man," "Shrek" and "Pirates of the Caribbean" sequels that opened big then took huge drops in subsequent weekends, revenues for "Fantastic Four" fell a steep 65 percent in the movie's second weekend.

Universal's comedy "Knocked Up" maintained strong word-of-mouth among audiences, pulling in $10.6 million, down just 24 percent from a weekend earlier. Ranking No. 5, "Knocked Up" raised its four-week total to $109 million.