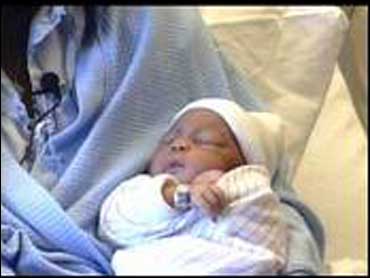 Add another name to the list of residents at the Cape Cod military base where evacuees from Hurricane Katrina are staying.

But this one didn't need a plane to get there.

Dionne White of New Orleans gave birth Tuesday at Falmouth Hospital to a boy whom she named Cape Cod Bannister, or "C.C." for short. It's the first birth to an evacuee staying at Camp Edwards.

CBS Station WBZ-TV 4 Boston reports that C.C. is Dionne White's 13th child and she's calling him a miracle. She says she plans to make Cape Cod her permanent home. One reason is because the five children who are with her on Cape Cod -- love it.

"They love everything here and I wouldn't take that from them," White told the station.

White said she wants to stay in Massachusetts because she found something on Cape Cod that she never found in New Orleans -- people who care about her.