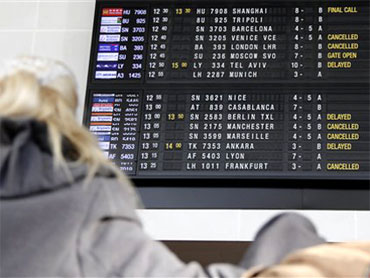 At least 350,000 people are stranded across Europe as snow and ice shut down airports, roads and rail systems during the holiday travel season. More winter weather in the forecast means many travelers will not be able to get on with their plans until at least Wednesday.

The weather has caused 60 percent of flights to be cancelled at the major airports in Paris, Frankfurt, Berlin, as well as London, where they were telling people to just stay away, reports CBS News correspondent Mark Phillips.

"I'm distraught," said Betty Jackson of Houston, stuck in London. "I'm disappointed. We're not allowed into the terminal without a seat," and they can't get a seat without getting into the terminal.
"I don't know who to talk to," Jackson said.

There's no point talking to the people who run the trains. The lines for the diminished services to Paris and Brussels stretched through the inside of the station and all the way around the block outside.

"We either sit in a hotel all day or we stand in a line all day, but there is no other way off this lovely island," Jackson said.

Chagrined British officials promised an inquiry into the failure to clear the remnants of a storm that dumped five inches over parts of England Saturday morning, the Associated Press reports. Other European airports rebounded from weekend snowfall and resumed close to normal flight schedules by Monday.

"It can't be beyond the wit of man surely to find the shovels, the diggers, the snowplows or whatever it takes to clear the snow out from under the planes, to get the planes moving and to have more than one runway going," London Mayor Boris Johnson said as British Airways canceled its Monday short-haul schedule from Heathrow.

Forecasters have said Britain is experiencing some of the most severe winter weather in a century, with continued freezing temperatures and snowfall accumulations expected Monday afternoon and evening, the AP reports. Experts said the extreme winter weather may be related to climate change due to global warming. With a warmer climate, there's more moisture in the air, which makes storms including blizzards more intense.

BAA offered little hope of relief from travel purgatory, saying a maximum one-third of scheduled flights would be allowed to take off and land at Heathrow until at least 6 a.m. (1 a.m. EST) Wednesday, the AP reports. The British government approved night-flight operations at Heathrow in an effort to remove the backlog, but officials warned it may take until after Christmas to do so - and longer if more snow falls.

The capital's smaller airport, Gatwick, announced late Monday that there will be no outbound flights until Tuesday morning because more snow is expected, the AP reports.

Frankfurt airport, Germany's biggest, was clear of snow and ice but officials canceled about 300 of 1,340 flights because of problems elsewhere in Europe, the AP reports. French civil aviation authorities, meanwhile, asked airlines to reduce their flights at the two main Paris airports by 30 percent.

The snow-related problems come near the end of a year filled with travel disruptions, including the April shutdown of much of Europe's airspace because of a plume of ash from a volcano eruption in Iceland.