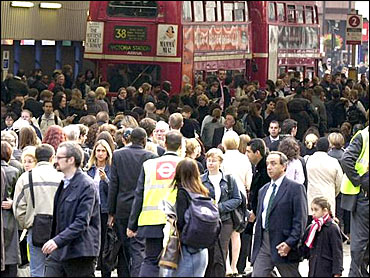 The natural increase in Europe's population is slowing and may start a steep decline within a few decades, researchers say.

Researchers writing in the journal Science said European population growth reached a turning point in the year 2000 when the number of children dropped to a level that statistically assured there will be fewer parents in the next generation than there are in the current generation.

In effect, the authors say, the momentum for population growth in the 15-nation European Union has flipped from positive to negative and the trend could strongly influence population numbers throughout the 21st century.

"If the current fertility rate of around 1.5 births per woman persists until 2020, negative momentum will result in 88 million fewer people in 2100, if one assumes constant mortality and no net migration," the researchers say. The EU population in 2000 was about 375 million.

Brian C. O'Neill, a researcher at the International Institute for Applied Systems Analysis in Austria and a co-author of the study, said the projection is based on the age structure of the current European population which now has more adults than children.

A population decline in Europe is not assured, said O'Neill, but the decline in the number of future parents is a fact that may set in motion a drop in population.

"That is going to push the population toward decline," he said. "Whether it actually ends up in a decline will depend on other factors, particularly migration. ... The European population may not decline if migration is high enough to offset this population momentum."

The change in the traditional role of women has been a major factor in the projected decline in population, the authors said. The demands of education and career encourage many women to put off having their first child.

In the 20th century, the average age at first birth of mothers shifted sharply from the low 20s to the late 20s. As the trend toward having the first child continues to advance toward an older age it locks in a decline in natural population growth, said O'Neill.

Hans-Peter Kohler, a University of Pennsylvania researcher who has written extensively on population trends, said the paper by O'Neill and his co-authors is "a quite important study."

He said the research demonstrates that fertility in a population can be significantly affected by social trends that encourage women to delay starting a family. Although this has had a major effect on the European population, he said, it has not been a major factor in the United States.

"There is a delay in the U.S., but it is much less pronounced when compared to the Europeans," said Kohler.

O'Neill's co-authors on the study in Science were Wolfgang Lutz and Sergei Scherbov of the Vienna Institute of Demography, a part of the Austrian Academy of Sciences in Vienna.