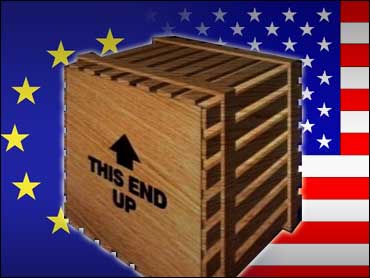 The European Union said Monday that it has started imposing millions of dollars in sanctions on U.S. goods because of Washington's failure to end export tax breaks.

They are the first WTO-approved penalties ever imposed by Europe on the United States. The retaliatory measures had already been decided months ago and the announcement was expected.

"We have been left with no other choice than imposing those measures," said European Union Commission spokeswoman Arancha Gonzalez.

Although the World Trade Organization has authorized $4 billion in sanctions — the biggest amount ever — the 15-nation European Union is taking a graduated approach, hoping to pressure Congress to change the legislation while limiting the impact on European companies and consumers.

"The day this legislation is passed, the EU will immediately lift its countermeasures," Gonzalez said.

The tariffs penalize the United States for failing to eliminate a tax break that is worth $5 billion a year to U.S. exporters. It was declared an illegal export subsidy by the World Trade Organization and lawmakers agree they must repeal it.

"Although everyone knew this was coming, the WTO sanctions hit U.S. manufacturers where it hurts -- in exports and jobs -- and in an election climate, the Bush Administration's option of trade sanctions or corporate tax breaks amounts to a choice of poisons," said CBS News foreign affairs analyst Pamela Falk, who teaches international trade law.

But the House and Senate disagree on corporate tax cuts to replace the old ones. American business, divided between manufacturers hoping for help and multinational companies hoping to modernize American tax laws, cannot agree on a solution.

Under the EU's action, a 5 percent penalty tariff awaits U.S. exports such as jewelry and refrigerators, toys and paper. The penalty climbs by 1 percentage point for each month that lawmakers fail to bring U.S. laws in line with international trade rulings.

The dollar's sharp decline in value against the euro, the European Union currency, means American goods are cheaper on European markets. That may protect U.S. manufacturers from feeling the bit for some time, said Gary Hufbauer, a trade economist at the Washington-based Institute of International Economics.

"Add all of this together, and you can see why we are going beyond the deadline," he said.

Presidential politics, combined with worries about the loss of jobs to other nations, make any congressional debate over new tax cuts a dicey proposition.

Senate leaders expect to start debating their legislative solution this week, then set it aside temporarily to work on next year's federal budget.

Democrats resisted Republican entreaties to avoid offering politically charged amendments, insisting that the tax bill is the best place this year to deal with economic issues.

Democratic Sen. Max Baucus said Democrats will offer some amendments that are unlikely to pass the Republican-run Congress but would send a message to voters. Possibilities include an extension of federal unemployment insurance, an increase in the federal minimum wage and a requirement for companies that move jobs overseas to give employees three months' notice.

"That would be very bad and send a bad signal to the Europeans about how serious we are about getting this done," said Senate Finance Committee Chairman Charles Grassley, a Republican.

Senate Republicans also must work out some disagreements among themselves. Many back the bill's effort to direct new tax breaks to U.S. manufacturers.

But two senators say tax breaks aimed only at manufacturing will complicate the corporate tax system and encourage more companies to become manufacturers in name.

"If we continue to go down this road, that definition of manufacturing would grow," said Sen. Don Nickles. "We would regret it."

In the House, Republicans have not yet passed a bill drafted late last year.

They find little common ground with Democrats, who began a long-shot bid to force a different solution to the floor for debate and are hammering away at the administration's economic record.

Further complicating the matter, Republicans cannot agree among themselves whether to help only manufacturers or set aside some of their tax-cutting dollars to rewrite rules for multinational corporations.

Illinois Republican Rep. Don Manzullo is pushing for leaders to drop tax cuts that might encourage companies to move jobs overseas. He said there is good reason that such contracting out has emerged as an issue in the political campaign.

"The international tax cut makes it cheaper for American companies to move production overseas. It's just that simple. It is political," he said.

The export subsidy is only the latest skirmish between the United States and European Union over trade. Last week, the WTO allowed the EU to impose sanctions over a 1916 anti-dumping law, Agence France-Presse reporter, and the EU protested a new U.S. policy to bar cold cuts and foie gras from France.

In December, President Bush scrapped import tariffs he had imposed in 2002 to help the battered steel industry, after the EU threatened to impose $2.2 billion in fines on a wide range of products from key election states Mr. Bush is hoping to win this year such as Florida, California, Louisiana and the Carolinas.

A rift is also developing over the U.S. Byrd amendment. Under the measure — named for its sponsor, U.S. Sen. Robert Byrd — hundreds of millions of dollars in fines collected by the U.S. government have been handed over to companies that lodge complaints against foreign exporters judged to be selling products in the United States at artificially low prices.

In the past year, the U.S. and EU have also squabbled over European restrictions on genetically engineered food and a policy banning countries who opposed the Iraq war, like France and Germany, from reconstruction projects there.