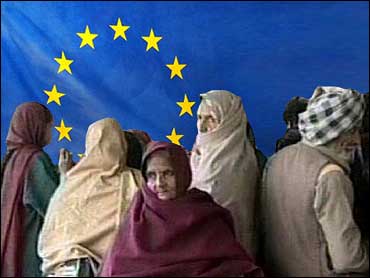 European Union justice and interior ministers agreed Friday that new immigrants to the 25-nation bloc should be required to learn local languages, and to adhere to general "European values" that will guide them toward better integration.

Just this month in the Netherlands, the slaying of filmmaker Theo van Gogh by a suspected Muslim radical unleashed a wave of attacks against mosques, churches and religious schools in a country once famed for its tolerance.

Tensions also rose in Belgium, where authorities arrested a suspect Friday accused of sending death threats to a senator of Moroccan heritage who criticized radical Muslims.

"It's not like we are against immigration," Verdonk said. "If you want to live in the Netherlands, you have to adhere to our rules ... and learn our language."

Highlighting a European-wide problem, Verdonk said that some 500,000 Turkish and Moroccan immigrants in the Netherlands don't speak Dutch.

For now, integration policies across the continent vary greatly. Public concerns over immigration have fueled electoral successes for far-right parties in several European countries, including Austria and Italy, where they have joined the national government.

Many Muslims have bristled at new rules targeting immigrants that they say amount to racial profiling that is insensitive of their religion.

Yet incoming EU justice and home affairs commissioner Franco Frattini told reporters in Rome that integration had to be an essential part of an EU policy.

"We can't imagine an immigration policy that focuses only on the prevention of illegal immigration, without considering the integration of those who want to enter a European country to live and work there in full respect of the law of both the country and Europe," Frattini said.

The EU ministers also set out a list of 11 nonbinding guidelines for governments and immigrant communities, including accepting basic European values, providing employment and education, knowledge of the local language, culture and history, and open access to local health care and other public services.