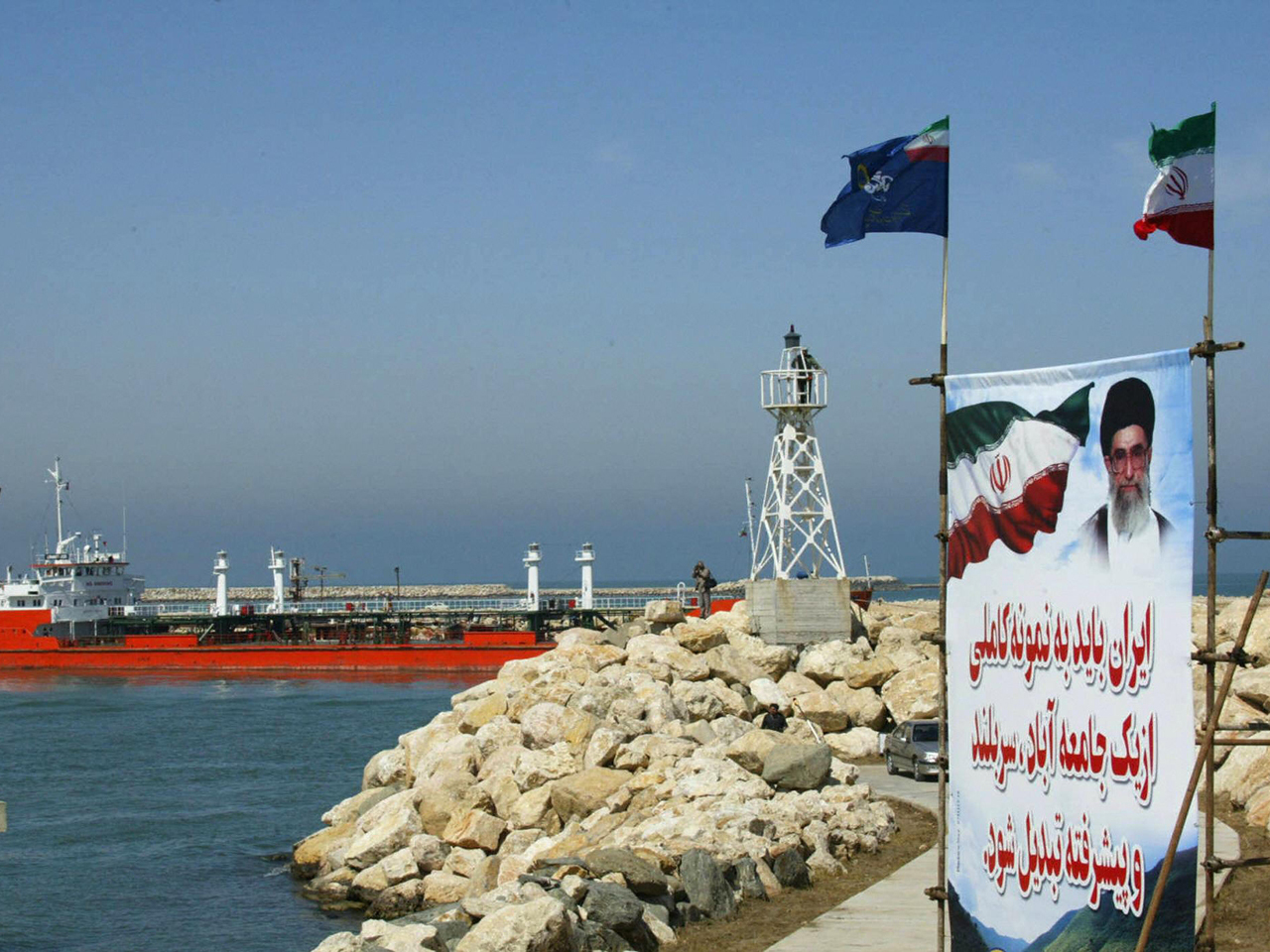 BRUSSELS - The European Union and Iran raised the stakes Monday in their test of wills over the Islamic republic's nuclear program, with the bloc banning the purchase of Iranian oil and Iran threatening to retaliate by closing the Strait of Hormuz, through which a fifth of the world's crude is transported.

The escalating confrontation is fraught with risks — of rising energy prices, global financial instability, and potential military activity to keep the strait open.

The EU's 27 foreign ministers, meeting Monday in Brussels, imposed an oil embargo against Iran and froze the assets of its central bank, ramping up sanctions designed to pressure Iranian officials into resuming talks on the country's nuclear program.

EU officials say the tighter sanctions are part of a carrot-and-stick approach, an effort to increase pressure while at the same time emphasizing their willingness to talk.

In Washington, Department of State Secretary Hillary Rodham Clinton and Department of the Treasury Secretary Timothy Geithner welcomed the EU decision, calling it "another strong step in the international effort to dramatically increase the pressure on Iran." In their joint statement, they said the EU sanctions, combined with earlier ones imposed by the U.S. and the international community, `will sharpen the choice for Iran's leaders and increase their cost of defiance of basic international obligations."

But the initial response out of Tehran, the Iranian capital, was harsh.

Ramin Mehmanparast, a spokesman for Iran's Foreign Ministry, called the economic sanctions "illogical and unfair" saying: "It is only understandable in the framework of propaganda and psychological war."

Mehmanparast was quoted by website of state broadcasting company as saying, "Pressure and sanctions against a nation that has a strong logic and reason for its policy is a failed method."

He said due to the world's long-term need for energy, "It is not possible to impose sanctions on Iran," which has huge resources of oil and gas.

And two Iranian lawmakers threatened that their country would close the strait in retaliation for the EU embargo.

Lawmaker Mohammad Ismail Kowsari, deputy head of Iran's influential committee on national security, said Monday the strait "would definitely be closed if the sale of Iranian oil is violated in any way."

The strait — just 34 miles wide at its narrowest point — runs alongside Iran and is the only way to get from the Persian Gulf to the open sea. Tensions over the potential impact its closure would have on global oil supplies and the price of crude have weighed heavily on consumers and traders. The U.S. and Britain both have warned Iran not to disrupt the world's oil supply.

After news of the EU move, benchmark crude for March delivery rose 90 cents on the day to $99.23 a barrel in early morning European time in electronic trading on the New York Mercantile Exchange. Brent crude was down 35 cents at $109.51 a barrel on the ICE futures exchange in London.

Many analysts doubt that Iran would maintain a blockade for long, but any supply shortages would cause world oil supplies to tighten temporarily. But Kowsari said that, in case of the strait's closure, the U.S. and its allies would not be able to reopen the route, and warned America not to attempt any "military adventurism."

An American aircraft carrier, the USS Abraham Lincoln entered the Gulf on Sunday without incident to conduct scheduled maritime security operations, and U.S. warships frequently operate in the Gulf. But when the carrier USS John Stennis departed the Gulf in late December, Iranian officials warned the U.S. not to return. The British Ministry of Defense said British and French warships joined the U.S. carrier group transiting through the Strait of Hormuz "to underline the unwavering international commitment to maintaining rights of passage under international law."

Russia's Foreign Ministry said the sanctions are a severe mistake likely to worsen tensions. "It's apparent that in this case there is open pressure and diktat, aimed at 'punishing' Iran for uncooperative behavior. This is a deeply mistaken policy, as we have told our European partners more than once," the ministry said in a statement. "Under pressure of this sort, Iran will not make any concessions or any corrections to its policies," it said.

The EU sanctions include an include an immediate embargo on new contracts for crude oil and petroleum products. Existing contracts with Iran will be allowed to run until July.

Last month, the U.S. enacted new sanctions targeting Iran's central bank and its ability to sell petroleum abroad, but it has delayed implementing the sanctions for at least six months, worried about sending the price of oil higher at a time when the global economy is struggling.

Other countries are steering clear of such measures altogether. China also does not support an embargo, and Japan's finance minister, Jun Azumi, has expressed concern about the effectiveness of U.S. sanctions on Iran — not to mention their potential impact on Japanese banks.

Some 80 percent of Iran's foreign revenue comes from oil exports and any sanctions that affect its ability to export oil would hit its economy hard. With about 4 million barrels per day, Iran is the second largest producer in OPEC.

"It means that we will paralyze, bit by bit, Iran's economic activity and keep the country from using a major part of its resources," said French Foreign Minister Alain Juppe. "You can be skeptical, but it is better than making war."

"Our message is clear," the statement said. "We have no quarrel with the Iranian people. But the Iranian leadership has failed to restore international confidence in the exclusively peaceful nature of its nuclear program. We will not accept Iran acquiring a nuclear weapon."

"The recent start of operations of enrichment of uranium to a level of up to 20 percent in the deeply buried underground facility in Fordo near Qom further aggravates concerns about the possible military dimensions to Iran's nuclear program," the foreign ministers said in a statement Monday.

That accelerated enrichment is in violation of six U.N. Security Council resolutions and 11 resolutions by the board of the International Atomic Energy Agency, "and contributes to rising tensions in the region," the statement said.

"I think this shows the resolve of the European Union on this issue," Hague said.

The EU also decided to freeze the assets of the Iranian central bank. Together, the two measures are intended not only to pressure Iran to agree to talks but also to choke off funding for its nuclear activities.

Before Monday's decision, negotiators worked hard to try to ensure that the embargo would punish only Iran — and not EU member Greece, which is in dire financial trouble and relies heavily on low-priced Iranian oil.

The foreign ministers agreed to a review of the effects of the sanctions, to be completed by May 1. And they agreed in principle to make up the costs Greece incurs as a result of the embargo.