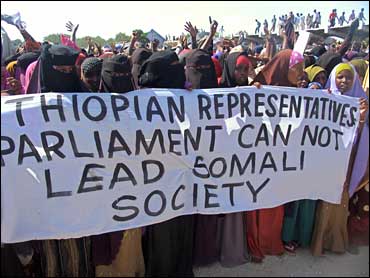 An Ethiopian official said Saturday that Ethiopian troops were on the border with Somalia.

Bereket Simon, an adviser to Prime Minister Meles Zenawi, said that the troops had not entered Somalia, as the leader of Somalia's Islamic Courts Union claimed. "Ethiopia has a right to monitor its border," Bereket told The Associated Press. He gave no further details.

The Ethiopian troops entered Somalia through the border town of Dolow in the southwestern region of Gedo at 8 a.m. (0500GMT), Ahmed said.

In recent days, Ethiopian troops have been crossing into Somali border towns and leaving, Sheikh Sharif Sheikh Ahmed, chairman of the Islamic Courts Union, which captured the Somali capital just days ago, said.

"They have deployed a lot of soldiers around the border towns, which is why we have been saying that Ethiopia is going to send in troops to Somalia," the cleric said.

The Islamic Courts Union is the group behind the militiamen that have swept across southern Somalia installing clan-based, religiously oriented municipal administrations.

It captured Somalia's capital, Mogadishu, on June 6 after months of on and off fighting with an alliance of warlords backed by the U.S. More than 330 people died in the fighting, most of them civilians. The group now controls most of southern Somalia.

The Islamic group, accused by the United States of harboring al Qaeda, portrays itself as free of links to Somalia's past turmoil and capable of bringing order and unity. But the future of a country accustomed to moderate Islam would be uncertain under hard-line Islamic rulers.

Leaders of the Islamic Courts Union deny that they harbor any terrorists.

Ethiopia has intervened in Somalia in the past to prevent Islamic extremists from taking power.

Ethiopians were also key power brokers in forming President Abdullahi Yusuf's transitional government in 2004. Yusuf was their preferred candidate for president. Yusuf, himself a former warlord, had asked for Ethiopian troops to back up his government in 2004.

An Islamic Courts Union spokesman, meanwhile, said the last two main warlords who lost the Somali capital to the militia fled the country on board a U.S. warship on Saturday.

But the U.S. Naval 5th Fleet, which patrols international waters off Somalia and is based in Bahrain, said it had no reports that any of its ships had picked them up.

Abdi Rahman Osman, spokesman for the Islamic Courts Union, said Muse Sudi Yalahow and Bashir Rage left Mogadishu late Friday on a boat and were picked up by a U.S. warship off Somalia's coast early Saturday

U.S. officials have acknowledged backing the warlords against the Islamic group.

The departure of Yalahow and Rage from Mogadishu would mean the 11-member warlord-led Alliance for the Restoration of Peace and Counterterrorism has collapsed.

Most of them have publicly declared their resignations from the group and retreated to their clans or expressed support for the Islamic Courts Union.

On Friday, more than 10,000 Somalis demonstrated against a plan to call in foreign peacekeepers, insisting that an Islamic militia advancing across the country can restore law and order better than an internationally backed government struggling to assert its authority.

The protest, amid signs of a deepening divide between the weak government and the Islamic militia, also was aimed at Ethiopia.

The government's proposal for foreign peacekeepers is limited to troops from Uganda and Sudan in part to allay fears troops from traditional rival Ethiopia would be included in any peacekeeping mission.

But many Somalis think any foreign troop project could be an opening for Ethiopia, seen as an ally of transitional President Abdullahi Yusuf.

Rumors had abounded in Mogadishu of Ethiopia massing troops on the border to intervene on behalf of the U.N.-backed government.

Sheik Abdulkadir Ali Omar, the deputy chairman of the Islamic Courts Union, told journalists Friday that his group rejected the idea of peacekeepers.

While differing on the contentious point of peacekeepers, Omar said his group had no intention of setting up a competing national government and that its goals were limited to ending the anarchy and violence besetting this country of 8 million people.

Somalia has been without an effective central government since the fall of dictator Mohamed Siad Barre in 1991.

The Islamic group's only competition for control of southern Somalia is Yusuf's transitional government.

Yusuf's government is supported by Somalia's neighbors, the United Nations, the United States and the European Union, so opposing it could mean regional and international isolation and possibly crippling sanctions for any administration the Islamic forces try to build.

The transitional government, whose military consists of little more than the president's personal militia, has watched from the sidelines as the Islamic forces overcame a coalition of secular warlords to take control of southern Somalia.

The government is based on Baidoa, 155 miles northwest of the capital, Mogadishu, because of instability in Mogadishu.

Omar said that all Somalis were Muslim, their culture was Islam and that he expected any new government to recognize that fact, but he insisted he wanted Somalis to decide what form a new government should take.

But there appeared to be some division within the union.

Sheik Ali Deere, an influential cleric who founded the first Islamic court in 1996, told Friday's demonstration: "We want to work (as a group) on the basis of Islam. We are against a secular constitution and foreign intervention."

Such rhetoric has fueled concerns that Islamic extremists will establish a Taliban-style government. U.S. President George W. Bush has expressed concern about Somalia becoming a haven for terrorists.