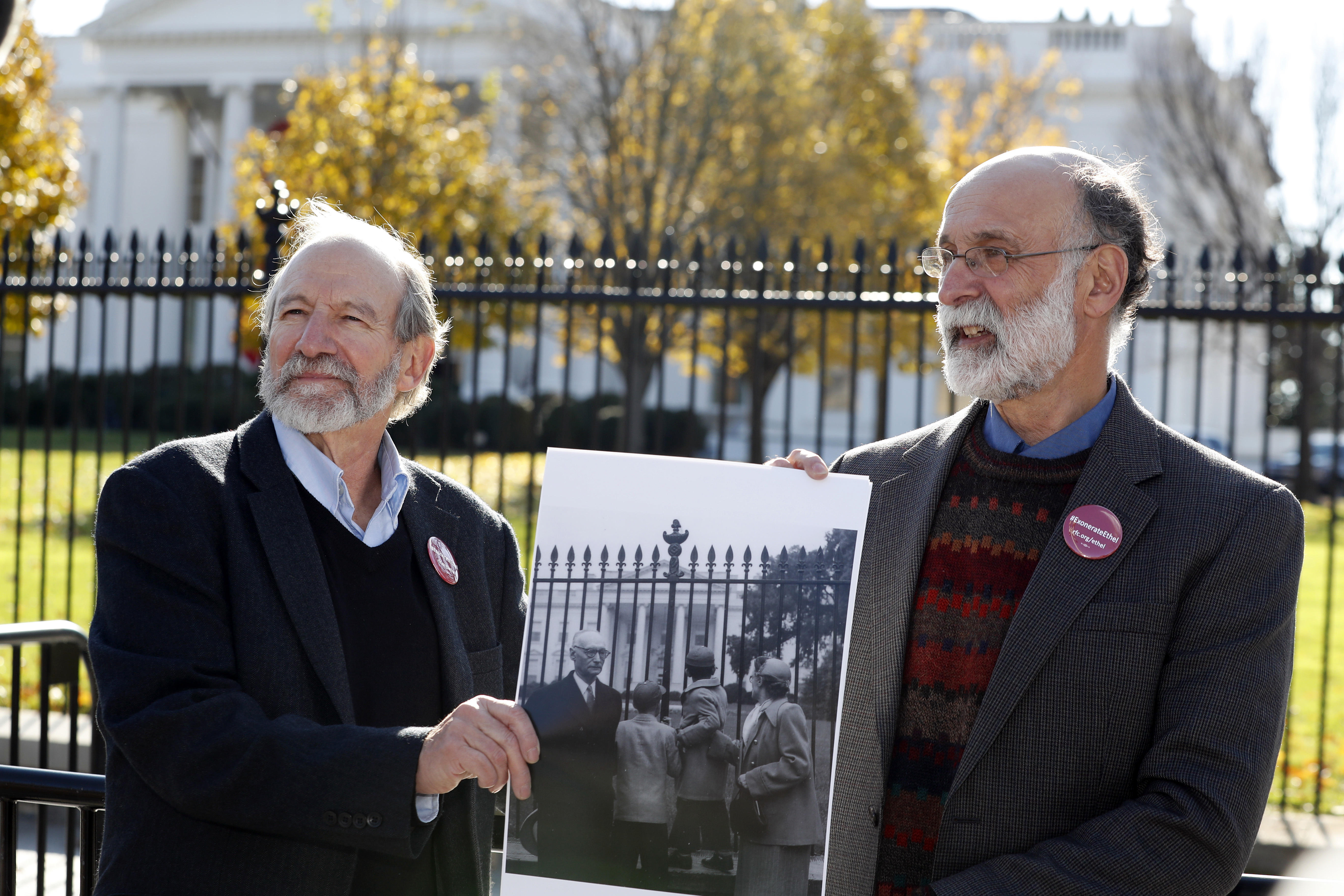 WASHINGTON -- The sons of convicted spy Ethel Rosenberg returned to the White House on Thursday, more than 50 years after pleading unsuccessfully to spare her life, in a last-ditch appeal to President Obama to exonerate her amid new evidence.

Rosenberg was executed in 1953 along with her husband, Julius, after being convicted of conspiring to pass secrets about the atomic bomb to the Soviet Union. But court records made public last year through a judge’s order cast doubt on the conventional narrative of a Cold War espionage case that captivated the country.

“This is our mother we’re talking about,” Robert Meeropol, one of Rosenberg’s two sons, said as he stood outside the White House gates. “Since we can’t bring her back to life, there could be nothing more satisfying to us than to have the government acknowledge that this shouldn’t have happened, that this was wrong.”

The new documents showed that Ethel Rosenberg’s brother, whose damning trial testimony against her and her husband helped secure the couple’s conviction, had never implicated his sister in an earlier appearance before a grand jury. The brother, David Greenglass, offered the grand jury no evidence of his sister’s direct involvement and said he never discussed such matters with his sister.

As young boys, Robert and Michael Meeropol visited the White House in 1953 in a failed bid to get President Dwight Eisenhower to prevent their parents’ executions. Half a century later, the brothers approached a guard booth outside the White House and asked to deliver their letter to Mr. Obama.

They were turned away by U.S. Secret Service. “OK, well, we tried,” Michael Meeropol said as he stood in the sun, peering through the gate at the West Wing. “Thank you very much, anyway.”

No matter, the brothers said. They’ve already sent a hard copy to Obama senior adviser Valerie Jarrett, and are hoping Mr. Obama will act before leaving office. The White House declined to comment.

Both brothers argued that a national reckoning over an erroneous execution is crucial, perhaps now more than ever.

“We have gone through cycles in our history of hysteria, targeting people, over punishing, framing people. We’re in danger of that happening again,” Michael Meeropol said. “Recognizing that in the past we’ve done things we shouldn’t have done might be a cautionary tale.”

The Meeropols are not seeking a presidential pardon, saying that would suggest their mother was guilty. They instead are seeking a public exoneration, akin to a 1977 statement by then-Massachusetts Gov. Michael Dukakis on behalf of Nicola Sacco and Bartolomeo Vanzetti, Italian immigrants who were convicted in a 1920 murder. That proclamation said “any stigma and disgrace should be forever removed” from their names.

In an interview broadcast on CBS’ “60 Minutes” in October, the Meeropols told contributor Anderson Cooper that an exoneration would have personal and political meaning.

“Our mother was killed for something she did not do,” Robert Meeropol told Cooper. “She was taken away from us. That’s as personal as it can get. But, the fact that the government facilitated the invention of evidence in order to convict someone of a capital crime, that is something that should concern everybody.”

It’s not clear what action, if any, the Obama administration will take in its waning weeks. But Rosenberg’s supporters believe their prospects are dim once President-elect Donald Trump takes office, in part because Roy Cohn, once a lawyer for Mr. Trump, was a member of the Justice Department’s prosecution team against the Rosenbergs.

“The ghost of Ethel Rosenberg is going to haunt the White House once Donald Trump takes office,” Robert Meeropol said.

The Rosenbergs both maintained their innocence, though they requested only Ethel’s exoneration. The sons said that’s because they believe their father was guilty of conspiracy to commit espionage, though they argue he didn’t engage in atomic spying and shouldn’t have been executed.

Ethel Rosenberg’s supporters believe their cause was helped by the July 2015 release of Greenglass’ grand jury testimony, which a federal judge in New York unsealed in response to a request from historians and archivists following Greenglass’ death.

That 1950 testimony conflicted with statements made a year later during the couple’s trial by Greenglass, who was indicted as a co-conspirator and was himself sentenced to 10 years in prison.

Greenglass said he had given the Rosenbergs research data he had obtained while working as an Army machinist at the Los Alamos, New Mexico, headquarters of the top-secret Manhattan Project to build the atomic bomb. He said he recalled seeing his older sister transcribing handwritten notes to give to the Soviets on a portable typewriter at the Rosenbergs’ New York apartment in 1945.

But the grand jury records show no mention of that and indicate he appeared to minimize his dealings with his sister.

Greenglass told the grand jury that Julius Rosenberg was adamant that he should continue with his Army service so he could “continue giving him information,” but when asked whether his sister, Ethel, was similarly insistent, he replied, “I said before, and say it again, honestly, this is a fact: I never spoke to my sister about this at all.”

Decades after the trial, Greenglass was quoted by a New York Times journalist as having admitted to lying at trial about his sister in order to protect his wife. In a May decision that ordered the records unsealed, U.S. District Judge Alvin Hellerstein noted that Greenglass said in his new statements that it was likely his wife, Ruth Greenglass, rather than Ethel Rosenberg, who typed up the notes that were passed to the Soviets.

The brothers were adopted following their parents’ executions and changed their last name.