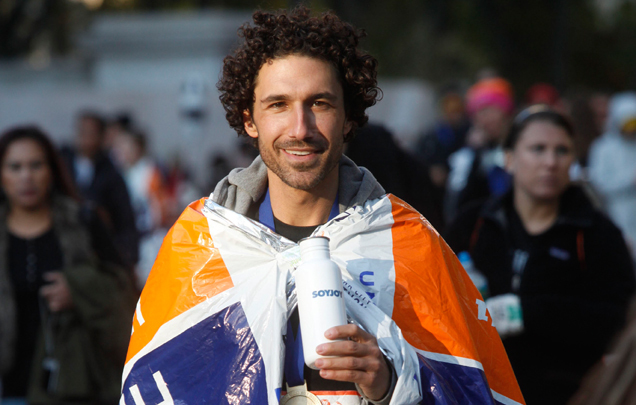 (CBS) Former "Survivor" winner Ethan Zohn didn't let cancer get in the way while running the ING New York City Marathon on Sunday. He finished the 26.2-mile race in 4:20:46.

After he completed the run, Zohn tweeted, "26.2 in the bag. NYC marathon finished. Lots of rest. Lots of Muscle Milk. Hopefully can walk tomorrow."

He later wrote, "I'm so sore...but it was worth it. Take THAT canzer."

Fans cheered for Zohn all throughout the course, and his girlfriend of eight years, Jenna Morasca, was waiting at the finish line. "She was right there, by my side, as always," Zohn told People. "I gave her a big fat hug and a big sweaty kiss and it was worth every second of it."

Zohn, 37, was first diagnosed with Hodgkin's lymphoma in April 2009. In September, he found out that it returned to the chest.

The reality TV star will receive chemotherapy for the next three months before getting a stem-cell transplant.