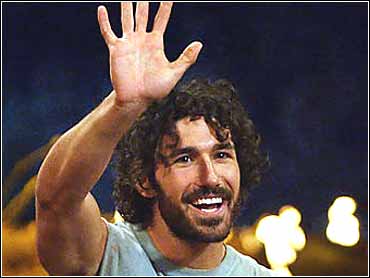 When Fairleigh Dickinson assistant soccer coach Ethan Zohn informed the players and coaching staff that he was going to be a contestant on the CBS show "Survivor," he instantly became the target of good-natured abuse.

— We started to call him `Survivor Boy,''' FDU men's coach Seth Roland said. — I'd say, `Hey Survivor Boy, can you make sure everyone's on the bus?' Or `Survivor Boy, do you think you can warm up the goalkeepers now?' Stuff like that. It was endless.

— I think it was getting out of control when I asked him to teach the goalkeepers how to train by leaping through rings of fire.''

— I dreaded going to practice on Fridays,'' Zohn said this week, referring to the day after — Survivor: Africa'' aired on CBS.

Throughout the 2001 soccer season, one which saw FDU enjoy a Cinderella ride to the NCAA quarterfinals, Zohn wasn't able to utter a word to anyone about the outcome of his 39 days in the Shaba National Reserve in Kenya, where he began his quest for the $1 million grand prize with 15 other contestants.

— I couldn't tell a soul,'' Zohn said. — Not even my mother could know anything about it. It was tough to keep it bottled inside me, but I liked that I was able to lie to my friends. Seth would poke and prod, asking me every day.''

— Nobody knew what was going to happen,'' said senior Brian Romero. — Every day at practice, someone would come up to him and say, `Hey, Ethan, did you win or not?' We tried to get him to admit to it, but he wouldn't budge.''

The 27-year-old native of Lexington, Mass., kept avoiding being voted off the African reserve, while gaining momentum and popularity with every passing Thursday. And last week, Zohn was the one who got the last laugh as it was revealed that he had won the third edition of the popular series and the $1 million winner-take-all prize.

— I'm really happy for Ethan. He's such a nice, down-to-earth guy,'' said Roland, who guided the Knights to a 17-7 record, winning the Northeast Conference championship and three games in the NCAA Tournament before falling to eventual national champion North Carolina.

He watched the final episode at a CBS party in Los Angeles, with his mother and his two brothers.

After the party, he had a super busy weekend, filming episodes of — The Hollywood Squares'' and doing numerous interviews. He arrived in New York Monday, where the interviews continued, including an appearance on — The Late Show with David Letterman.''

— I'm still pretty star-struck by it all,'' Zohn said.

He said he has no idea what the future holds, especially with regard to his soccer coaching career, although Roland hopes to have him back.

—I love soccer,'' Zohn said. — It's always been a passion of mine. I don't know if I'll be back at FDU, but I'll be involved in soccer somewhere.''

Zohn, a 1996 Vassar College graduate who currently lives in New York, has played professional soccer as a goalkeeper for the Highlanders Football Club in Zimbabwe, the Cape Cod Crusaders and the Hawaii Tsunami. In 1997 and 2001, he was a member of the U.S. National Maccabiah Team.

He said he hasn't thought yet about what he's going to do with the winnings. — I have the check, but I haven't even cashed it,'' he said. — I just like looking at it for now and looking at all the commas.''

© 2002 The Associated Press. All Rights Reserved. This material may not be published, broadcast, rewritten, or redistributed