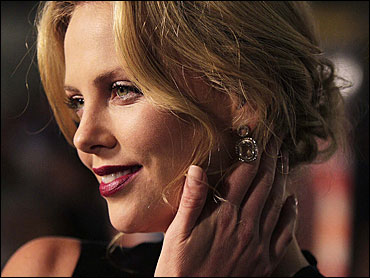 Past winners of the title include Jessica Biel, Angelina Jolie and Scarlett Johansson. The issue featuring Theron hits newsstands Oct. 16.

Theron spoke with the magazine about growing up on a farm, her political interests and her work, including her latest movie, "In the Valley of Elah," a murder mystery set among U.S. troops newly returned from Iraq.

"I wanted to make the movie precisely because it evades formulas about guilt," the 32-year-old actress said. "I'm drawn to ambiguity."

Theron won an Oscar for her role in "Monster." Her screen credits also include "North Country," "The Cider House Rules," "The Italian Job, "The Legend of Bagger Vance," "Navy Diver," "The Yards" and "Sweet November."

At age 16, Theron began her career as a model at age in South Africa, where she was born and raised. She traveled to fashion capitals Milan, Paris and New York City to model. When her modeling contract was up, she stayed in New York City.

She attended Joffrey Ballet School, but her career as a ballet dancer ended due to a knee injury when she was 18. She then headed to L.A. to start her acting career.

Her father is of French Hugunot decent and her mother is of German decent.

Theron met longtime boyfriend Stuart Townsend on the film "Head In The Clouds" in 2004.