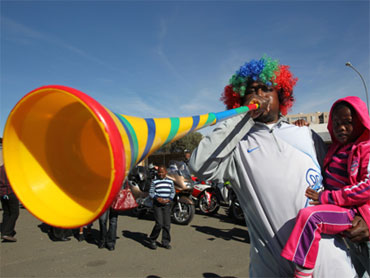 The World Cup is causing quite a buzz on U.S. television.

Preliminary estimates indicate the quadrennial soccer tournament is off to a fast start with viewers, even with the odd, horn-blowing soundtrack that ESPN has sought to minimize on its broadcasts.

The first-round contests introduced most of the world to the vuvuzela, a plastic trumpet carried into the matches and blown on incessantly by thousands of fans. On television, it sounds as if the game is being played before a nest of angry bees.

It's louder at the games than it is on the telecast. ESPN is altering the sound mix on its broadcasts to minimize the crowd noise, network spokesman Bill Hofheimer said. The network has accepted it as part of the atmosphere and has made no complaints about the vuvuzelas, he said.

The sound is driving others crazy, though.

"The constant drone of cheap and tuneless plastic horns is killing the atmosphere of the World Cup," wrote John Leicester, an international sports columnist for the Associated Press. He wrote that it is drowning out the oohs, aahs and cheers that lend excitement to the matches.

FIFA has defended South African fans' right to blow the vuvuzelas despite the widespread criticism.

"I have always said that Africa has a different rhythm, a different sound," the FIFA president Sepp Blatter said in a Twitter message on Monday. "I don't see banning the music traditions of fans in their own country."

Blatter went on to ask: "Would you want to see a ban on the fan traditions in your country?"

Danny Jordaan, the World Cup's organizing chief, said that "it's a difficult question but we're trying to manage it the best we can."

"I would prefer singing," he said.

Plainly, many of the fans take pride in the tradition.

A website informing visitors about South Africa, www.safrica.info, describes the vuvuzelas as "a beautiful noise for the beautiful game."

Love or hate the vuvuzela buzz, there's no doubt the tournament is drawing viewers in big numbers.

Saturday's first-round tie by the U.S. and English teams was seen by an estimated 13 million on ESPN, the Nielsen Co. said on Sunday. It was the nation's most-watched soccer telecast since the 2006 World Cup final between Italy and France, and the most-watched involving the U.S. men's national team since 1994.

San Diego, San Francisco and Las Vegas were the cities most interested in the game, according to the Nielsen figures.

A viewership estimate for the U.S.-England game on the Spanish-speaking Univision network was not immediately available.

An estimated 5.4 million people in the U.S. watched the tournament's first game Friday between Mexico and the South African home team on Univision, Nielsen said. ESPN's telecast of that game had 2.9 million viewers.

Popular though the games have been, they have not drawn "26 billion" viewers - more than four times the world's population - as trumpeted by FIFA in a press release and echoed by television networks and online reports around the world.

FIFA was claiming that "The cumulative audience of the 64 matches of the 2010 FIFA World Cup is expected to be in excess of 26 billion" - a dubious claim even counting viewers multiple times as FIFA intended - though other outlets did not make such a distinction in any case, CBS News foreign affairs analyst Pamela Falk reported.