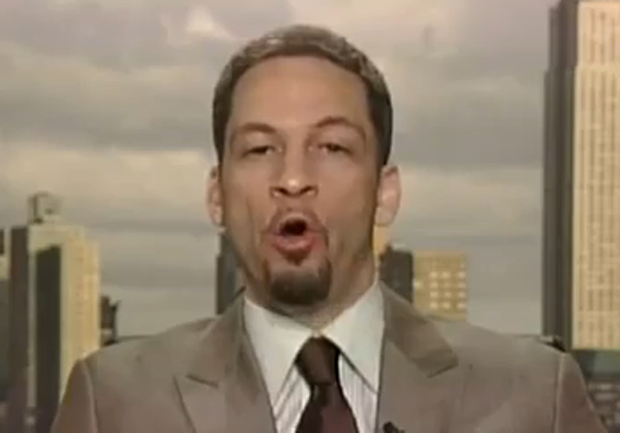 NEW YORK ESPN says it regrets that one of its reporters described Jason Collins as a sinner after the NBA center publicly revealed he is gay.

Chris Broussard, who covers the NBA, said on the air Monday that Collins was "walking in open rebellion to God" by living as a gay man.

In an article in Sports Illustrated, Collins became the first male athlete in one of the country's four major sports to come out as gay.

In a discussion with openly gay commentator LZ Granderson, Broussard cited the Bible, saying that living an openly homosexual lifestyle -- as well engaging in adultery and premarital sex -- is "openly living in unrepentant sin."

In a statement, ESPN's Josh Krulewitz said: "We regret that a respectful discussion of personal viewpoints became a distraction." He said the network was "fully committed to diversity" and welcomed Collins' announcement.

Broussard later took to Twitter to clarify his remarks with the following statement:

"As part of a larger, wide-ranging discussion on today's news, I offered my personal opinion as it relates to Christianity, a point of view that I have expressed publicly before. I realize that some people disagree with my opinion and I accept and respect that. As has been the case in the past, my beliefs have not and will not impact my ability to report on the NBA. I believe Jason Collins displayed bravery with his announcement today and I have no objection to him or anyone else playing in the NBA."

At least one prominent sports figure came out in Broussard's defense - golfer Bubba Watson. The 2012 Masters champion responded Tuesday to the ESPN reporter's comments on Twitter:

Broussard is not the first ESPN personality to cause a stir with on-air remarks. In December, the network suspended commentator Rob Parker for questioning the "blackness" of Redskins quarterback Robert Griffin III. In January, ESPN declined to renew Parker's contract.

Mark Cuban, owner of the NBA's Dallas Mavericks, told "CBS This Morning" on Tuesday that Collins has shattered a "ceiling in professional sports" by acknowledging that he is gay.

Cuban said Collins' announcement "set the platform for athletes in any professional sport to realize, 'you can be you'" and says the news erases a pervasive fear among openly gay high school and college athletes who are nervous about advancing to professional leagues because the stigma of homosexuality and locker room politics.

Collins, 34, is currently a free agent in the NBA and Cuban is unsure whether or not he will be picked up for another season.

"Jason has been a journeyman," Cuban said. "Teams have had him and have loved him but he's a backup center. And it's not like those are super difficult to find."