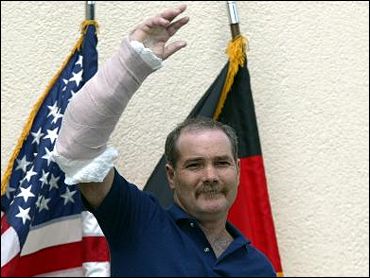 Thomas Hamill, the 43-year-old truck driver who escaped from his Iraqi militant captors over the weekend, was taken Monday to the U.S. military's Landstuhl Regional Medical Center in Germany for treatment and a reunion with his wife, Kellie, expected on Tuesday.

"He's doing good, very good," said Marie Shaw, spokeswoman for the U.S. military's Landstuhl Regional Medical Center, adding that Hamill would likely be able to return home by the end of the week.

Hamill's whereabouts had been unknown since he was seen in a dramatic video taken after guerrillas captured him during an April 9 ambush on a supply convoy. Gunmen shot up and set fire to the vehicles on the outskirts of Baghdad.

Hamill, who received a gunshot wound in the right forearm when he was abducted, was treated for the wound and regularly received food during his three weeks in captivity, a U.S. military doctor said Tuesday.

Hours before Kellie Hamill left Mississippi for Texas on the first leg of a journey to Germany and a reunion with her husband, Thomas Hamill called home with a mild warning for his family.

"He said he's doing good but that he had lost a little weight in all this," said his mother, Phyllis Hamill, who spoke with her son Monday, then turned the phone over to her daughter-in-law.

"His kids looked at the picture on television and said with the beard and all, it didn't look like daddy. But he looks pretty good to me."

Hamill got a visit from celebrity governor Arnold Schwazenegger, who was in Germany visiting wounded soldiers at the base hospital.

The two met for about five minutes in a hospital room. Schwarzenegger said Hamill requested the meeting after learning that the governor was visiting wounded troops.

"I just tried to let him know we support him and good luck," Schwarzenegger said. "It seemed to me like someone who clearly was through an ordeal. He seemed to me good."

Some three weeks after being abducted, Hamill's captors took him to the mud farmhouse near the town of Balad, 50 miles north of Baghdad.

The door to Hamill's room was a piece of sheet metal propped up by a board. Hamill, of Macon, Miss., told soldiers he believed a single guard was nearby, but out of sight.

About 11:15 a.m. Sunday, soldiers from the New York National Guard's 2nd Battalion, 108th Infantry Regiment drove their Humvees along a stretch of road next to a broken oil pipeline.

When Hamill heard the Humvees, he knocked over the sheet metal, pried open the doors of the shack and ran about 300 yards toward the convoy.

"He said he thought this was the only chance he had, so he made a run for it," said Merrill, of Deposit, N.Y. "He said he didn't know if the guard was there or not."

Four soldiers who described the escape refused to answer questions about Hamill's time in captivity.

Merrill, who spent less than two hours with the former hostage, said Hamill was disoriented but in good health. He had just one bottle of water and didn't know exactly where he was.

"He was obviously very glad to see us," Merrill said.

Hamill escorted the platoon back to the shack, which was empty. Soldiers found an abandoned AK-47. A military photo taken in the shack showed his bed arranged on a couple of couch cushions on the dirt floor, with a blanket tossed over them. A bucket served as his latrine.

The Mississippi man told soldiers he'd been well treated by his captors, who gave him a rudimentary medical kit, a box of cookies and an oil lamp.

Troops arrested two Iraqis farming in a field near the shack, Merrill said.

Capt. George Rodriguez said aiding in Hamill's rescue "actually felt kind of good — something that I think everybody wants to do."

Hamill's kidnapping was widely reported: shortly after the ambush, his abductors spotted journalists and had them videotape Hamill sitting in a car seated next to a masked gunman.

In the brief, startling images, Hamill identified himself and told the cameraman from Australia's ABC television, "They attacked our convoy. That's all I'm going to say." Then the car sped off down the highway, passing a burning tanker truck.

Hamill's captors later threatened to kill him unless the United States lifted its siege of Fallujah.

Hamill's cousin, Jason Higginbotham, told CNN that Hamill had tried to escape before but went back to his captors, apparently unnoticed, after finding himself in the desert without food or water.

"He escaped one time about three days earlier and he was out in the middle of the desert. A helicopter came over and he tried to flag it down, but they evidently didn't see him," Higginbotham said. "They were taking fairly good care of him, so he went and put himself back in captivity without them knowing."

Hamill, who works for Halliburton Corp. subsidiary KBR, formerly known as Kellogg, Brown & Root, was among seven American contractors who disappeared after the April attack. The bodies of four have been found, and two are missing.

A U.S. soldier kidnapped in the same attack, Pfc. Keith M. Maupin of Batavia, Ohio, was seen in separate video footage. The remains of a second soldier missing in the attack, Sgt. Elmer Krause of Greensboro, N.C., were identified April 23.

Across Iraq, five foreigners remain hostage and 11 others are missing, according to the U.S.-led occupation authority. Ten abducted foreigners have been killed and 35 released, it said.