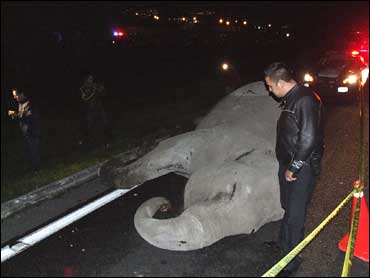 A five-ton elephant escaped from a circus and wandered onto a busy highway, where it was hit by a bus. Both the driver and pachyderm were killed early Tuesday.

Bus driver Tomas Lopez, 49, was killed and at least four passengers were hospitalized after the pre-dawn collision in Ecatepec, just north of Mexico City.

State police spokesman Juan Sanchez said the elephant escaped from its cage at the Circo Union, but he declined to give any other details. He said officials were investigating.

The state-funded Notimex news agency reported that the elephant named Indra escaped as its keeper arrived to feed it, knocking down a metal door and wandering through two neighborhoods before trying to cross the highway.

Last month, a 500-pound lion escaped from a local lawmaker's private zoo in southern Mexico, killing two dogs and a pig and attacking a woman and child on a donkey before it was sedated and captured.