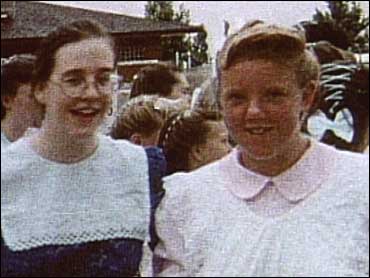 Child advocate Laura Chapman is not afraid to take risks. Nine years ago Laura rescued two teenage girls from an FLDS branch outside Salt Lake City, and she risked kidnapping charges and even death threats to do it.

"I could relate to them. I could see myself in them," says Laura, who was once herself a member of the FLDS community in Hilldale, Utah.

"My father had four wives, I have 31 brothers and sisters," Laura tells correspondent Erin Moriarty.

She was 18 when she was forced to marry a man she barely knew. "We had never kissed. We never had any kind of intimacy at all," she says. "So I knew what that's like for a young woman. It's a severely emotionally abusive experience."

Laura tried to be the dutiful wife, and before long she had five children. But inside she struggled as she watched young girls being married off to older men. "There were just things that happened over the years that my soul told me where wrong," she says.

The Bold And The Beautiful

The last straw for Laura was when her own husband announced that in order to get to heaven he would need another wife. In fact, he had already chosen her: a 16-year-old girl.

"He told me that he married her," Laura recalls. "Tears ran down my face and he said, 'You look like you need a hug. Can I hug you?' And I said, 'Don't you ever touch me again and get the hell out of my house.'"

At 28 years old, Laura took her five children and left both her husband and the FLDS. With only a fifth grade education, she went to college, supporting her children on welfare and grants.

It was in 1999, when 48 Hours first met Laura living in a suburb of Salt Lake City and working as an anti-polygamy advocate. "What I went through to leave and get an education and raise five children, one with a handicap on my own is horrific. No girl raised in the United States of America should ever have those basic rights to an education or who she marries taken from her," she says.

So when Laura got a call begging her to help Sarah and Kathy, she couldn't refuse. "The girls said they had one week before their marriages would be performed. Sarah's mother was making her wedding dress," Laura remembers.

Because one of the grooms was said to be in his 40s, Laura first tried to get Utah children's services to intervene. "I was like, 'If 16-year-old girls are facing an arranged marriage in polygamy, can you help them?' He said 'Not until they've had unwanted sex with an older man,'" she remembers.

So on April 6, 1999, Laura took matters into her own hands and helped the girls escape under the cover of darkness. Clutching her belongings, Sarah was the first to be whisked away.

"And tears just ran down my face. I was just like 'She's such a child, how could she be a wife?'" Laura remembers.

Then it was time to pick up Sarah's best friend Kathy.

"How would you respond if someone said 'How dare you take these teenagers from their parents?'" Moriarty asks.

"How dare these parents raise their children so isolated and restricted! No one should start their life that crippled in mainstream society. No one should," Laura argues.

Sarah and Kathy were hidden away in safe houses, but would need to go to court to make it official. In the meantime, the teenage girls started to experience the simple pleasures of being teenagers.

"According to them we are going to hell anyway, so we might as well have fun before we do," Sarah remarked at the time.

They began to shed every part of their old lives. "When he spun me around, I didn't recognize myself in the mirror. It didn't occur to me that it was me," Sarah says, recalling seeing herself after her very first trip to a hair salon.

It was a life-transforming moment, says Sarah today. She is now 26 years old and living in the Northwest.

"That was a really tough decision for a 16-year-old, don't you think though? To walk away from your siblings, from your parents?" Moriarty asks.

"Yeah, it was my whole life," Sarah says. "And I knew that walking away that there was a possibility that I would never ever, ever see them again."

Asked what it was that led her to make that huge decision, Sarah says, "One of the big things that we kept hearing over and over and over again was they had to break my spirit. I laughed too much. I was too happy. If I would have stayed there, I wouldn't have survived."

But Sarah's escape would cause tragic consequences for the sisters and brothers she left behind. "If I would have known what was gonna happen with them, I don't know that I would have left," she says.

Later, Laura would soon learn about the steep price that Sarah paid for her freedom, and the fate of Sarah's best friend Kathy.

Laura Chapman flew more than 800 miles to learn what had become of Sarah, one of two teens she helped escape a life of polygamy nine years ago.

"If you didn't help Sarah and Kathy what was the life they were going to have?" Moriarty asks.

Instead, Sarah today is a college graduate, working as a counselor for troubled teens, with her eye on law school.

Speaking of her graduation, Sarah tells Moriarty, "I was really excited. Because one of the things I never thought I'd be able to do is graduate, and now I've graduated, not once but twice once."

But getting to that point wasn't easy: at age 16 she entered high school for the first time after being forced to drop out in eighth grade.

"She was kind of like a foreign exchange student in high school," Laura remarks.

And it was a lonely time: Kathy, Sarah's best friend and fellow runaway, suddenly gave up after just a few months and went home. "She said 'We can't be friends anymore, can we?' I said 'Have a nice life, Kat, I love you,'" Sarah remembers.

Sarah was cut off completely from everything and everyone she had known.

"What was the hardest part? What did you miss the most though?" Moriarty asks.

"My siblings. I had basically raised them for most of my life. It would be like a mom walking away from her kids," Sarah says.

Sarah-like all who leave-was shunned. But the worst punishment was imposed on those who stayed. "Retaliation's always on the family. Always. I just didn't know that it would be as extreme as it was," Sarah says.

Warren Jeffs, who was assuming control over the FLDS at the time Sarah ran away, retaliated, she says, by reassigning her mother to another man.

Sarah says her mother was reassigned to "Uncle Fred" - Fred Jessop, a FLDS church bishop then living more than 200 miles away in Hilldale, Utah.

Sarah's mom became one of his 39 wives; Sarah's brothers and sisters found themselves suddenly living in Jessop's massive home with as many of 50 of his other children.

Sarah's family was shattered. "How would you feel if one day, Carl was your dad and the next day Jeff was your dad?"

And over time her parents and nearly all of her siblings followed Sarah out; now they live near Sarah in the Northwest in a community of other FLDS exiles.

And today, even fellow runaway Kathy is back out. They are once again best friends. "It's comforting to know that you're close to other people who left," Sarah tells Moriarty.

Laura Chapman believes that Sarah's achievements should be the model for the children currently at the center of the Texas case.

One day, as she was watching that story unfold, she got a sudden jolt. "I saw my sister," she says.

Laura says she didn't know her own sister, who she had not seen for 27 years, was in Texas. "And there she was. There aren't words for what you feel. That could've been me," she says.

Laura fears that no matter how the Texas courts rule, Warren Jeffs-even from his jail cell-will continue to control and victimize women and children of the sect.

"He's run a whole community like Nazi Germany. He's tossed boys out.
He's taken women and children away from their father and given them to somebody else," she says. "It's a crime. It's a crime against innocence."

"48 Hours" preview: What Happened to the Perfect Child?

What happened to the perfect child? One woman's incredible story