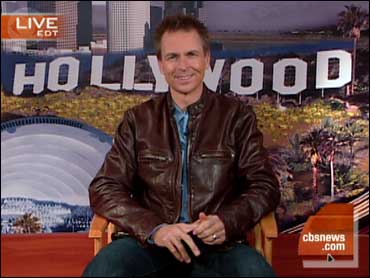 You could say that "The Amazing Race" host Phil Koeghan can keep a secret -- no matter how juicy or interesting.

And this time around he has a big one involving The Early Show anchors.

Koeghan, who was in Los Angeles, is about to start shooting the next "Amazing Race" and he is keeping mum on all of the juicy details.

Although he couldn't dish much on where exactly he is headed on his next adventure, he isn't hiding his excitement for what's to come.

"It's incredible. It's amazing, quite frankly. We'll be heading out for the 14th time to go around the world. We keep having this opportunity and for me, it's the best job I've ever had and I love it and thankfully the viewers love it and it's always nice to be employed and when you get employed and you get to go around the world and shoot great adventures with people and with an audience, there's nothing more exciting than that," he told Early Show co-anchors Harry Smith, Maggie Rodriguez, Julie Chen (via phone) and Early Show news anchor Russ Mitchell.

"The Amazing Race" will be starting in the United States, as it always is, but Koeghan admitted that the real reason he was there was to talk to the Early Show anchors about "Destination Unknown."

Julie Chen's leg is first. She was surprised -- and whisked away from the show's set Friday -- heading for -- Paris.

Although Keoghan won't be at every destination the Early Show anchors go, he will be giving them the clues.

"You'll find out where you're going and get your clues and you'll have absolutely no idea where you're going. And the next time that the viewers hear from you, you will be in a far-away land, and trust me when I say to you, it will be far away," Koeghan said.

"You will be jet lagged, exhausted, I might have you running through the airport with some heavy bags -- just exhaust you even more. We'll give all of the heavy bags to Dave Price," Koeghan joked. "Then you will be somewhere in the world and you will be doing things unknown at this point," he said.

"You're killing us," Rodriguez said.

"Can we win $1 million if we get there fast?" Chen asked.

"That's a conversation you might want to have with your husband," Koeghan replied.

"At this point, it's 'Destination Unknown,' prize unknown and money unknown. But I can promise you this, that where you're going, it will be tremendously exciting," Koeghan said. "You might want to bring an array of clothing. In fact, you will not even know what you need because you will not know what you're doing!"

The Early Show anchors will meet people along the way, but they will take their own individual trips and they may need some shots.

All of the information will be revealed when the Early Show anchors go to "Destination Unknown."

"He said we're going to be disoriented and confused and that's not much different than any other day," Smith said with a laugh.

"Destination Unknown" starts next week on "The Early Show."