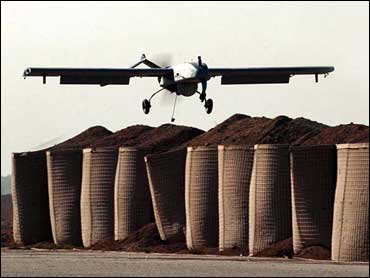 The incident underscores safety concerns with unmanned aircraft as defense officials campaign to use them more often during natural disasters and for homeland security.

Navy Adm. James Winnefeld Jr., head of Northern Command, said Thursday that the August mishap could hamper the Pentagon's push to have the Federal Aviation Administration ease procedures for drone use by the military in domestic skies.

"It certainly doesn't help our case any time there's a UAV (unmanned aerial vehicle) that wanders around a little bit outside of its controlled airspace," said Winnefeld, who also is commander of the North American Aerospace Defense Command. "We realize the responsibility on our part to include the technical capability and proper procedures. We'd just like to be able to get at it quicker."

Currently drones are used for patrols and surveillance along the nation's southern border, and sometimes at the northern border. But the military wants to use them more during hurricanes and other disasters to evaluate damage or target rescue efforts.

The FAA has been working for some time on new regulations governing the use of drones, but has yet to complete them. And the August incident brought one of the FAA's key concerns to bear - the prospect that remote operators can lose communications with the aircraft.

Drones routinely operate in war zones, such as Iraq and Afghanistan, where there is much less business jet or small plane traffic. FAA officials say there is a greater danger of collisions with such smaller aircraft in the U.S., particularly when drones are flying at lower altitudes away from large cities and airports, in areas where planes aren't required to have transponders or collision warning systems.

In such cases, according to the FAA, it is more important for pilots to be able to see each other and take action.

Winnefeld said he was in the operations center watching when controllers lost the link to their Navy MQ-8B Fire Scout during a test at the naval air station at Patuxent River, Md., and it flew into the capital region's restricted airspace.

"Do you let it fly over the national capital region? Let it run out of gas and hopefully crash in a farmer's field? Or do you take action and shoot it down?" said Winnefeld. "You don't want to shoot it down over a populated area if you can avoid it. We were going through all of that calculus."

As the fighter jets were about to be launched, he said, the Navy was able to reprogram the helicopter-like craft and bring it back.

Winnefeld said he agrees with the need for airspace safety, but maintains there is great demand for the drones and the military should be able to get them into the air more quickly when needed.

"We can't move quickly enough for me to solve this problem," Winnefeld said. "We need to push forward into getting the technology and the permission and the comfort level up to where we can do this as a matter of routine. This is where the future is going."

Speaking to defense reporters, Winnefeld said discussions are continuing with the FAA to find ways to streamline the approval process. At the same time, he said the Defense Department also must address FAA's safety concerns by insuring that the drones have the software and systems necessary to fly safely.

He also said he is considering the need for a slower and lighter piloted aircraft that could be used during events such as outdoor sports games, political conventions or inaugural activities. The high-flying F-16 fighter jets are too fast for some missions.

While his review is only just beginning, Winnefeld said there may be a need for an aircraft that can fly much more slowly and at lower levels to monitor events. He said he'd like to have some answers within a year.