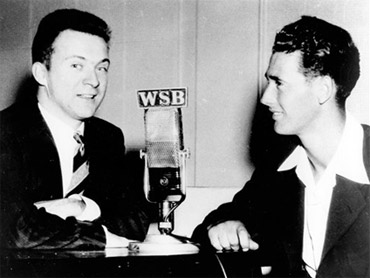 This story was written by CBSSports.com baseball columnist Scott Miller

The world is a little less gracious, a little less gentlemanly tonight. Legendary broadcaster Ernie Harwell is gone, probably talking with baseball fans in heaven above in that beautiful, courtly manner of his, and the voice of our game is momentarily silenced and forever changed.

If Michigan summers could talk, they would sound like Ernie Harwell: Relentlessly sunny and optimistic. I wrote those words last September after one of the greatest baseball voices of our time went public with his battle with cancer and, on this sad evening, I can't say it better than that.

I wrote this, too:

I know I'm not alone here: I listened to him on my transistor radio while on our swing set as a kid, on a portable radio in the backyard as the weekend sun shone and the Wiffle balls flew, on the car radio while my father took me to my Little League games. I listened on my alarm radio while falling asleep at night, on my car stereo as the high school years rolled past, on friends' radios as we played basketball on summer nights, ate pizza and laughed.

When the Tigers played out west and I worked early mornings in college, I'd go to bed by 11 and set the alarm clock twice, the first time for around 12:45 a.m. That way, I could listen to the last inning from Anaheim or Oakland and get the score before falling asleep for good. And when I left Michigan and sorely missed those warm summer nights with a wide open future, I listened to Ernie in rental cars when I returned, as good a Visitors' Bureau as any state could ever have.

I wrote several other things that day as well and, for those of you who missed it, here they are.

Danny Knobler: It's a sadder world without Ernie

Meantime, as we observe a moment of silence, I'll leave you with Ernie's beautiful "definition of baseball", as he put it, from the end of his Hall of Fame speech in 1981. Those of you who read this blog regularly or semi-regularly know my affinity for picking out a Rock 'N' Roll Lyric of the Day. Well, today, this is it, and it is perfect:

"Baseball is the president tossing out the first ball of the season and a scrubby schoolboy playing catch with his dad on a Mississippi farm. A tall, thin old man waving a scorecard from the corner of his dugout. That's baseball. And so is the big, fat guy with a bulbous nose running home one of his 714 home runs.

"There's a man in Mobile who remembers that Honus Wagner hit a triple in Pittsburgh 46 years ago. That's baseball. So is the scout reporting that a 16-year-old pitcher in Cheyenne is a coming Walter Johnson. Baseball is a spirited race of man against man, reflex against reflex. A game of inches. Every skill is measured. Every heroic, every failing is seen and cheered, or booed. And then becomes a statistic.

"In baseball democracy shines its clearest. The only race that matters is the race to the bag. The creed is the rulebook. Color merely something to distinguish one team's uniform from another.

"Baseball is a rookie, his experience no bigger than the lump in his throat as he begins fulfillment of his dream. It's a veteran too, a tired old man of 35 hoping that those aching muscles can pull him through another sweltering August and September. Nicknames are baseball, names like Zeke and Pie and Kiki and Home Run and Cracker and Dizzy and Dazzy.

"Baseball is just a game, as simple as a ball and bat, yet as complex as the American spirit it symbolizes. A sport, a business and sometimes almost even a religion.

"Why the fairy tale of Willie Mays making a brilliant World Series catch, and then dashing off to play stickball in the street with his teenage pals. That's baseball. So is the husky voice of a doomed Lou Gehrig saying, 'I consider myself the luckiest man on the face of this earth.'

"Baseball is cigar smoke, hot roasted peanuts, The Sporting News, ladies day, 'Down in front,' 'Take Me Out to the Ball Game,' and 'The Star-Spangled Banner.'

"Baseball is a tongue-tied kid from Georgia growing up to be an announcer and praising the Lord for showing him the way to Cooperstown. This is a game for America. Still a game for America, this baseball! Thank you."

Rest in peace, Ernie. You were beautiful. And prayers for his family.

Harwell tribute on YouTube, featuring his "definition of baseball" speech: