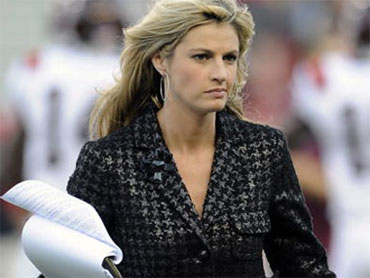 NEW YORK (CBS) "I did nothing wrong and I'm being treated like f***ing Britney Spears and it sucks." Those are the angry words of glamorous ESPN sports reporter Erin Andrews, 31, who was illicitly filmed in a peephole video showing her naked in a hotel room.

The former University of Florida dance team member, referred to as "Erin Pageviews" because of the Internet traffic she can generate, made the statement to 911 operators last week after "paparazzi" were lurking outside her Georgia home.

An audiotape of the July 22 call was released Wednesday.

In the audiotape, Andrews identifies herself and tells the operator, "I'm all over the news right now," and describes herself as "the girl that was videotaped in my hotel room in the nude."

Andrews has a private security team, but that did not stop a couple of enterprising news reporters from finding a way into Andrews' gated community and camping outside her house.

Police soon arrived and removed them.

The illegally-taped peephole video of Andrews, who Playboy magazine named "sexiest sportscaster" in both 2008 and 2009, went viral online and ESPN lawyers have been scrambling to shut down websites that post links to the material.

Photos: Erin Andrews Naked Peephole Video Scandal
Now, hackers are using the video as a lure to get click-happy web surfers to download dangerous malware to their computers.

One version of the hack, fools surfers into clicking on what appears to be a CNN version of the video. When they do so, a Trojan horse is installed on their systems, with which hackers can later attack the computer.

Andrews has become a popular fixture on ESPN and the web as a vivacious and beautiful reporter.

She has covered numerous sports for the network since 2004, often as a sideline reporter.