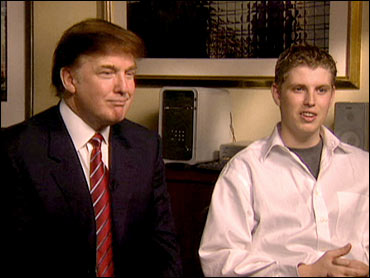 It all started, of course, with his parents – a supersized power couple living in the limelight. The glamorous socialite bride and the ringmaster.

"Generally speaking, if I put my name on something, you know it's gonna be good," brags father Donald Trump.

The Donald is the master builder who'd have you think he built New York City from scratch.

"He has an amazing work ethic," says son, Eric. "I really look up to him. I think it's amazing that you can find a job that you love and enjoy so much that you'd rather be doing it than taking vacations."

His mom, Ivana, wasn't available for our story, but Eric couldn't be closer to her. "She's got a great character. I love her. She's an extremely energetic person and her sense of adventure is amazing."

Eric is a prince to the manor born, part of that peculiar type of American royalty, who grows up behind the headlines with a gold-plated last name.

"I remember traveling a lot with him," says Eric. "I also remember spending a lot of time in the office, building Lego cities while he was negotiating deals when I was 5 or 6."

Eric, his older brother Donald and their big sister Ivanka watched up close as mom and dad mud wrestled through their garish divorce.

"People often stared and pointed," remembers Eric. "Growing up, that's something that gets to you."

Then came the aftermath of innuendo, trash-talk, money problems, girlfriends, and a second wife – followed by more girlfriends.

Eric was the child in the middle of it all. At 11, after the divorce, he left Trump Tower to live nearby with his mom.

"People are more critical of you. There are stereotypes," says Eric, who says he was under the microscope. "People often call you spoiled because you grow up in a prominent family."

But revealed under the microscope is a rich kid who fought hard to be regular. Now, he's a finance major at Georgetown University, just another sophomore on campus.

"I don't think I've had a person come up to me all year and ask me if I'm in the Trump family," says Eric.

He wants his life to look like ours but it doesn't.

If you're Eric, a three-day weekend means Aspen, Colo., where his mother, once a star on the Czech ski team, taught him the slopes.

"We're the first people on the mountain and the last ones off," says Eric. "We're always taking runs together. We're die-hard skiers."

He's consistently guarded, constantly polite. On the ski slopes and at college, Eric might be able to blend with the crowd. But on his home turf, in the heart of New York City, there's no mistaking that Eric is a Trump - and that being a Trump is just plain different.

On a snowy day in Central Park, Eric showed us the sights from his point of view. The world by Trump.

What does his dad think about when he's looking down from his officer at Trump Tower?

But Eric says dad never let him down. And as another school holiday approached, he headed back to Trump Tower.

"Look at all these cameras for my boy," says Donald Trump, who joined Eric for an interview with 48 Hours Investigates.

What's different about this father-son relationship?

"I don't think anything actually," says Eric. "We love eating pizza together and watching football and golf on TV."

"I eat too much pizza," adds Donald.

Eric says his dream is to be part of the Trump team. Donald thinks that dream is going to come true.

"He's got a wonderful capability. And then at some point he'll be tested, and tested very strongly," says Donald. "And then he's going to see whether or not he likes it. But I suspect that Eric will do well, and he's going to like it."

What if it becomes the Eric Trump Tower at some point?

"He'd be dismissed from the company immediately," says Donald.

Increasingly, Eric's place is by his father's side – hitting the streets of New York, inspecting the latest luxury Trump condo.

"I'd like to take them all over one day," says Eric. "He has got his ambitions," his father says.

This child of the headlines wants to make headlines of his own some day.
But what is perhaps most remarkable is how unremarkable Eric Trump is.
He's a regular kid, heading on daddy's jet to his regular old Palm Beach mega-mansion.

"My dream is definitely to be sitting in the office in Trump Tower learning from my father," says Eric. "I think we're gonna be an unbeatable team."

Could there be any more buildings in New York with the Trump name on them?

What Happened to the Perfect Child?
Thanks for reading CBS NEWS.
Create your free account or log in
for more features.
View CBS News In
CBS News App Open
Chrome Safari Continue
Be the first to know
Get browser notifications for breaking news, live events, and exclusive reporting.