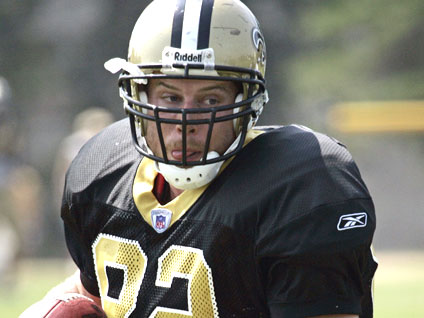 The two have reportedly been datingsince May, but many are asking themselves just who is he?

Here are five things you should know about him:

The old adage gets reversed for Johnson, 30, who by being "so reserved" ended up with the famous singer. According to an NFL insider who spoke to People magazine on Tuesday, "He's one of the nicest guys around."

Johnson and Simpson have both been married before. Johnson separated from his first wife, Keri Johnson, earlier this year, while Simpson filed for divorce from her husband and "Newlyweds" series co-star Nick Lachey in 2005.

A 6'3" native of Needham, Mass., Johnson not only excelled in sports -- he hit a hole in one on the golf course at age 13 and broke 11 school records while playing wide receiver for Yale University -- he's also a former academic All-American, who was called "The Big Nerd" by his Yale friends and spent his summers reading financial self-help books. Some of his favorites were "Smart Women Finish Rich" and "Rich Dad, Poor Dad," according to a 2004 article in the San Francisco Chronicle.

He went from being a 49er to a Saint.

Johnson started his football career with the San Francisco 49ers when he was drafted in 2001, but missed all of 2003 and 2005 because of injuries. In 2007, the New Orleans Saints signed him to a one-year contract. He was re-signed by the team on March 10, 2008, but the Saints released him later that year.

When football players usually drive a car of choice, their selections tend to be the big, bulky sport utility vehicle kind. Not so with Johnson. "When I met him, he was driving a Prius when other athletes were driving gas-guzzling cars," an NFL source told People. This "green" way of life should tie in well with Simpson -- the singer recently took to her Twitter account to espouse the virtues of a "vegan" diet.