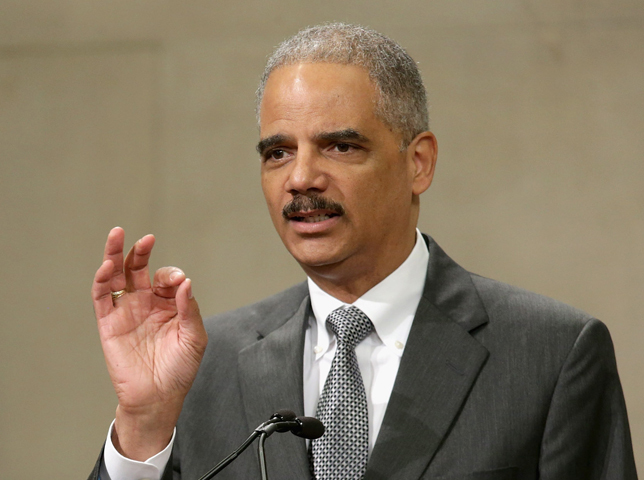 Attorney General Eric Holder promised that the Justice Department "will continue to act in a manner that is consistent with the facts and the law" as it considers whether to pursue criminal civil rights charges against George Zimmerman for the death of Trayvon Martin.

"We are determined to meet division and confusion with understanding and compassion - and also with truth," Holder said Monday in Washington, D.C., at the national convention for the African-American sorority Delta Sigma Theta. "We are resolved, as you are, to combat violence involving or directed at young people, to prevent future tragedies and to deal with the underlying attitudes, mistaken beliefs and stereotypes that serve as the basis for these too common incidents."

After a Florida jury on Saturday found Zimmerman not guilty of state charges, civil rights groups have called for the Justice Department to weigh in on the case. The department is reviewing evidence and considering whether to take action. Zimmerman, while serving as a neighborhood watch volunteer last year in a gated community in Sanford, Fla., shot the 17-year-old Martin, who was unarmed.

"This is a decision made by the Justice Department by career prosecutors," Carney said in a press briefing. "This is not something the president involves himself in."

Following Saturday's verdict, Mr. Obama release a statement that Carney said reflected the president's personal views on the tragedy of the loss of a young life.

"I know this case has elicited strong passions. And in the wake of the verdict, I know those passions may be running even higher," Mr. Obama said. "But we are a nation of laws, and a jury has spoken. I now ask every American to respect the call for calm reflection from two parents who lost their young son."

Specifically, Carney said that Mr. Obama's statement reflects "the fact that this loss symbolizes the loss we see daily in this country to gun violence."

Holder may also address the shooting, as well as gun violence generally, on Tuesday, when he speaks at the NAACP convention in Orlando. Carney said he's not sure Mr. Obama has spoken with Holder on the matter. "I don't believe this is something the president views as something he would discuss with the attorney general," he said.

"I think the president expressed the fact that it was a tragedy that a young man's life was taken that was true then, and it was true today," Carney said.

Holder said Monday that independent of the legal determination, the case is "another opportunity" for the nation to reflect on its values.

"We must not forgo this opportunity to better understand one another and make better this nation that we cherish," he said.

Holder added that the public should follow the example set by Martin's parents.

"I hope that we will approach this necessarily difficult dialogue with the same dignity that those who have lost the most, Trayvon's parents, have demonstrated throughout the last year - and especially over the past few days," he said. "They suffered a pain that no parent should have to endure - and one that I, as a father, cannot begin to conceive."