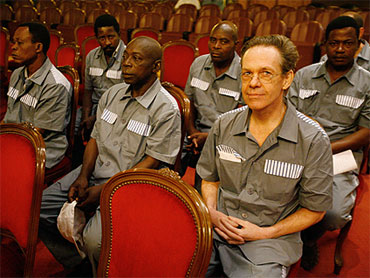 A British coup-plotter and four South African mercenaries pardoned for attempting the overthrow of Equatorial Guinea's government were freed from prison Tuesday in the tiny oil-rich African nation, the country's chief judge said.

Simon Mann and his co-defendants were convicted in a trial that aired a plot in which well-connected Britons and others sought to install an exiled opposition figure in Africa's No. 3 oil producing nation. The coup unraveled before it even began, when Mann and a planeload of other mercenaries were arrested in Zimbabwe where they were to buy assault rifles, grenades and anti-tank rockets.

The U.S. government reportedly got wind of the plot and blew the whistle, though no U.S. government official ever confirmed that. Several leading U.S. oil companies, including Exxon Mobil, Amerada Hess and ChevronTexaco, operate in Equatorial Guinea.

Mann, 57, who was born into a world of wealth and privilege, had been serving a 35-year sentence in Equatorial Guinea for the 2004 plot.

The case ensnared Mark Thatcher, son of former British Prime Minister Margaret Thatcher, as Mann implicated him as a chief bankroller in the coup plot along with Equatorial Guinean-based Lebanese businessman Eli Calil. Thatcher pleaded guilty in a South African court to unwittingly helping fund the operation. He was fined and given a suspended sentence.

Mann said Calil told him the government of Spain, the country's former colonial power, was aware of and supported the plot. The plan was to put into power opposition leader Severo Moto, who is exiled in Madrid, and get some control over the country's oil wealth.

Human rights groups accuse Obiang of using the oil wealth to make his family fabulously rich while most of his countrymen live in squalor.

Obono, who was the attorney general who prosecuted the coup plotters, denied rumours that Mann was unwell, saying he is "fine, fit." He also denied that any pressure had been brought by foreign governments seeking their release from the notorious Black Beach prison.

But a statement on the Ministry of Information Web site noted that Mann and the others were being freed "with the hope that the accused return to their families and receive appropriate medical treatment according to their age and health." The ministry noted that if he had served his 35-year sentence, Mann would have been more than 90 years old on his release.

It said the Ministry of Justice, Culture and Prisons proposed the pardon to the president, who granted "compassionate forgiveness."

Mann's family members said they were "overjoyed at the prospect of finally welcoming Simon home after 5½ long years away."

"The family is absolutely delighted that Simon has been pardoned and is to be released shortly," they said in a statement, according to Britain's Press Association. "Everyone is profoundly grateful to the president and the government of Equatorial Guinea."

Mann, a former officer in Britain's elite SAS and the alleged coup plot ringleader, was educated at Eton, a prestigious private school in Britain whose alumni also include Princes William and Harry. Mann is the son of former England cricket captain George Mann and heir to the Watley Ale brewing fortune.

Obiang took power in a 1979 coup in which then President Francisco Macias Nguema, his uncle, was assassinated by a firing squad. Under pressure from Western backers, Obiang held the first multiparty elections in 1991 and has won every election since, most recently in 2002 with 91 per cent of votes. New elections are scheduled for Nov. 29.

Opponents say the electoral process and voting are rigged in his party's favour.

Despite its wealth, most of Equatorial Guinea's half-million people are very poor, child mortality rates have risen and government officials are accused of siphoning off oil revenue.

Riggs was fined millions of dollars in money-laundering fines. Nothing was done against Obiang, who was invited to Washington by then-President George W. Bush in 2006 and called a "good friend" by then-Secretary of State Condoleezza Rice.